What a day yesterday!  Whew!!!  After a 16 hour day we finally made it back to the hotel room at 10:30 PM. This is about the busiest convention in the world for LaDawn and I.  Pre-cons, programs, and booth demos really fill up the day fast.  I was really happy to hit the sofa in our hotel room last night.  But, after a good night's sleep, we're raring to go again today ;~)

One of the highlights of the trip for me was after spending 3 weeks with Canon's new 600EX-RT speedlights, I think I finally have them totally figured out.  It was at my wedding shoot out that I received the inspiration to try one more thing to see if I could get them working the way I had always expected they should.  Oh, it was also re-reading the manual one more time and discovering one sentence that pointed me to the solution I needed to have all things come together ;~) 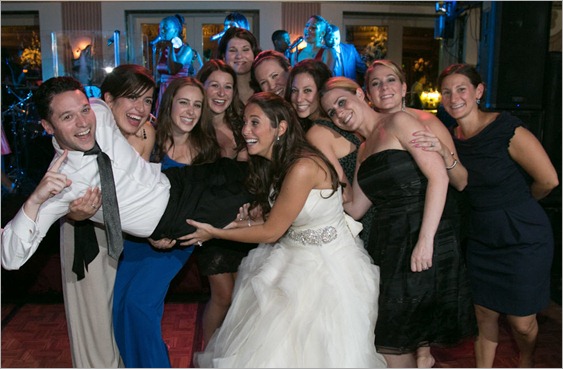 My goal was to see if I could get the speedlights to work as room lights at a wedding reception or any other event for that matter.  The photo above was a good first try this past Sunday.  Were they powerful enough?  What happens if they lost connectivity during the shoot, could I get them reconnected quickly?  How long would the batteries last?  Was recycle time going to be fast enough?  All these questions and more needed to be answered before I could rely on them for my next big job.

This weekend we have a family wedding where I'll get a chance to try them out again under some pretty challenging conditions.  With what I discovered on Tuesday, I'm super optimistic how they will perform. Be sure to stay tuned next week - I'm planning a full follow up report on how to get the most out of the new speedlight entries from Canon.

Last night I had one of the last programs of the day and I was beginning to slow down after the long day.  Something happens though when you get to the room, get the computer set up, meet with several of the attendees before the program – somehow, the adrenalin kicks in and I'm ready to go.

Last night I couldn't believe the crowd we had in the room - it was one of the largest I've seen for my Lightroom program.  I personally want to thank all those who came out to be part of the fun.  The time passed quickly and before I knew it, I was running out of time - YIKES!  I still had time to cover the most important points, give away two door prizes, and visit with several of the attendees after the session.  Thanks again everybody. 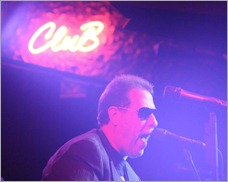 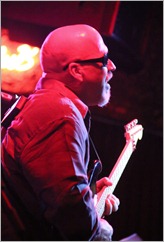 After my program it was a quick dash over to the Peachpit Authors reception.  We made it just in time to catch a Mexican adult beverage at Borders Mexican Grill, a favorite hangout at Mandalay Bay.  We also got a chance to visit with some of the new authors like Scott Valentine and Teri Campbell.  I come to find out that Teri, who has just completed his first book on food photography lives in Cincinnati, OH - right in my neighborhood!  We decided to hook up and visit once we both got back into town.  Heck, maybe I get him to do a guest blog post at DigitalProTalk.com.  Stay tuned. 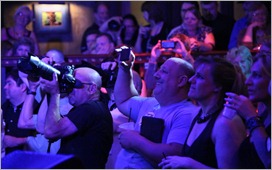 After the Peachpit party we headed over to the House of Blues for the big convention party.  The place was packed!!!! Everybody was really looking forward to another blow out performance by Big Electric Cat, Scott Kelby's band that has played at most of the PSWs these last several years.  They kicked off their set at 9:00 PM and rocked it for over an hour!! They were a huge hit with the crowd.

After my Lightroom session, LaDawn headed back to the room to drop off computers and cameras and I knew I was in trouble when she showed up in her dancing' pants.  I'm whipped and she wants to party!  What's a guy to do - heck join in the fun, right?  We had a great time with the other PSW revelers dancing the night away, well, at least an hour of the night anyway ;~)

Today is a much slower day for us.  I’m presenting at the Peachpit booth and also have my last program scheduled for 6:00 this evening.  That will wrap the convention for us.  Then we're up bright and early on Friday to catch a flight back to Cincy.  After landing we unpack the bags, recharge the batteries, and head to Dayton, OH for the family wedding.  Whew, what a week, but still a kick!

Hey everybody, that's it for me today.  Since we're on the run most of tomorrow, let me wish you a terrific weekend and I'll plan to see you back in Cincy bright and early on Monday morning.

See you then,  David