We have had a great couple of days  in Florence, Italy.  Of course the highlights of the trip have been seeing all the beautiful paintings and sculpture, the historic buildings and architecture throughout the city.  Once again, Florence was the birthplace of the Renaissance - the rebirth of Europe after the dark ages.  To be in the center of such history is a breathtaking experience.

Sunsets - Some Of The Best Are In Florence Italy!

We walked everywhere in Florence coving nearly 35 miles in our 3 day visit. Hey, you've got to walk off the Gelati desserts, right ;~)  One of our long walks took us to the top of the city, Piazzale Michelangelo where the view was magnificent!  We arrived just at sunset and LaDawn and I spent the next hour or so photographing the Florence skyline from about every perspective.  The image below is one of my favorites. 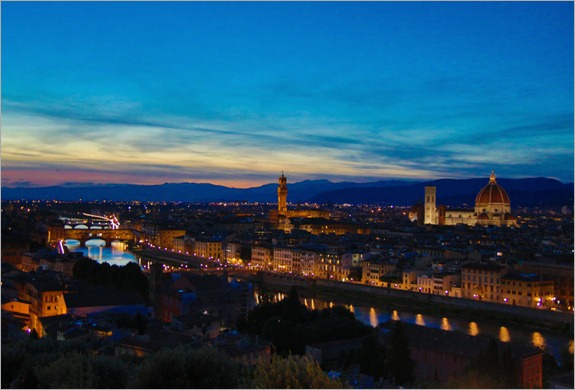 I love the HDR feature on my Canon 5D Mark III.  For images like the sunset above, it just adds so much more to the scene and really represents the images more as we remember them.  Look at the straight photograph below.  This was one of the three images used to produce the HDR image above.  It's not near as exciting as the original scene. 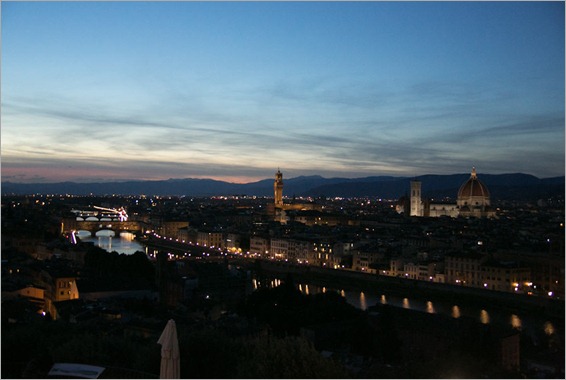 Sure, I could tweak it quite a bit in Lightroom and Photoshop and get a very beautiful result.  But, for a quick sunset grab, I like the HDR feature set to Art Vivid --- way cool!!

Piazzale Michelangelo is really one of the best locations to really feel the expanse of this historic city.  I clicked off a few more images, in HDR mode of course, highlighting some of the predominant buildings on the landscape like the Duomo below.  Enjoy! 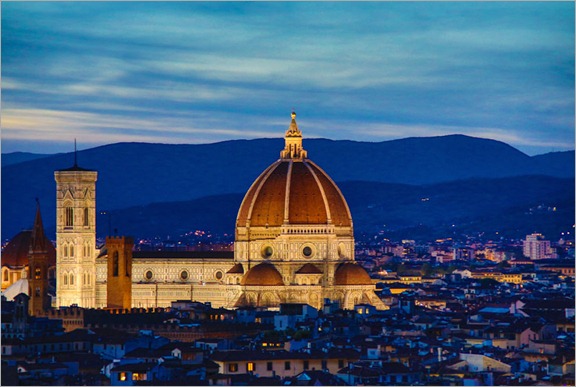 We have seen the original David sculpture by Michelangelo – no relation BTW, but Michelangelo’s interpretation of David from David and Goliath in the Bible.  David is considered to be one the pre-eminent works of art in the world.  Michelangelo's exciting sculpture captures both the strength and innocence of the subject.  Actually, Michelangelo saw a piece of marble in the courtyard years ago and asked if he could use it.  After getting the OK, he set upon creating this perfect masterpiece. 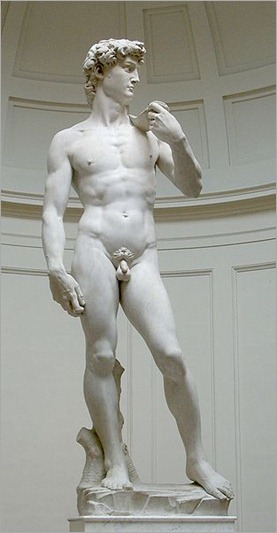 We also visited the Uffizi Museum, the oldest museum in the world and were presented with art works which clearly illustrated the transition from medieval art where perspective was not considered - the images were painted in a rather two dimensional perspective.  The Renaissance artists like Leonardo di Vinci, Michelangelo, and Botticelli brought a brand new dimension to their art….. literally! Seeing these world famous paintings up close and personnel IS quite a thrill. 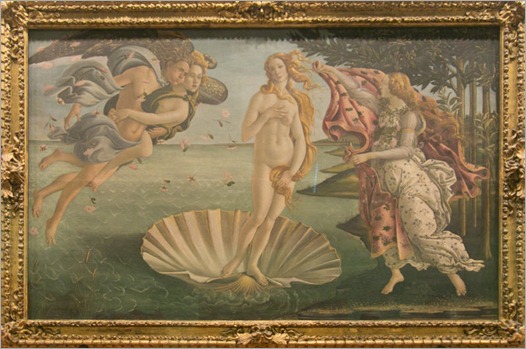 OK, I'm going to take a little liberty with one of the artist's masterpieces, Botticelli's "Birth of Venus" that you see above.  I thought the original image was painted with very muted tones. Maybe it’s the fact that the painting is over 500 years old.  I'm thinking, "How could this painting have looked if Mr. B had access to Lightroom and Photoshop?  Take a look at the second image - what do you think ;~) 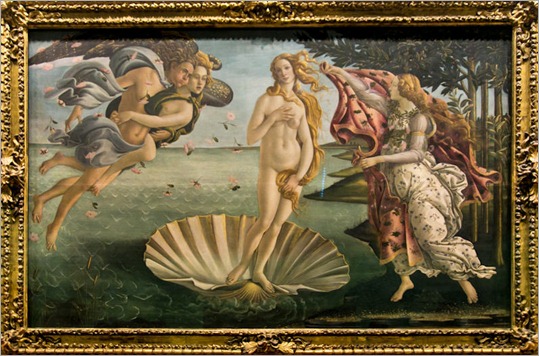 OK, before I offend any art historians out there, you need to see the Accademia Gallery "playful" version of Mr. M's famous David - please see image below. 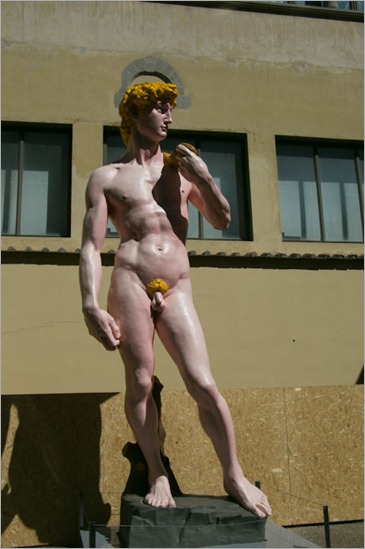 Yep, right outside the gift shop - there was the blond haired, pick skinned David for the entire world to see - kind of funny.

One Of The Friendliest Countries We've Ever Visited

One of the travel treats for me is meeting and visiting with the people in any new city.  I don't care if it's NYC, LA, London, or Florence, Italy - I'll always try to strike up a conversation.  For me, it's just another way to absorb the flavor of the people and the locale.  Everyone we've met has been always ready to help, even if they didn't speak the language, which, BTW so far, has not been an obstacle at all to our travels. 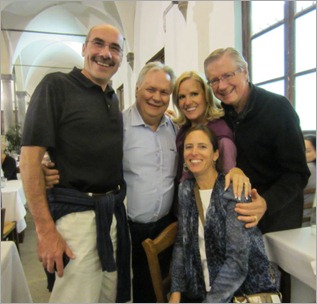 In addition to the friendliness of the locals, We've also met several fellow tourists who were equally friendly and willing to share experiences of their travels.  One of the couples we met, they were newlyweds, were on a 5 week holiday throughout Europe.  They told us that in New Zealand, that he as a police officer receives 12 weeks of paid vacation and must take that time off - we were floored.  They believed the average employee received around 6 weeks paid vacation after their first year of employment. They were also equally as floored when we explained that an average employee in the US would receive 1-2 weeks paid vacation after working a full year or two, then maybe 3 weeks after being employed with the same company after 4-5 years. We work way too hard in the good old USA ;~)

On Friday, we enjoyed one of our best dinners at the super popular and highly recommended Il Latini Restaurant.  This restaurant is HUGE seating upwards of 400 guests on a busy night.  And they do it with a kitchen staff of four and  wait staff of only 17 - efficiency is the key, we were told by our good natured waiter.  We were quickly engaged in a lively conversation with two couples next to us - all of us sharing our travel adventures so far.  Greg and his wife Kelly even had our photograph taken with the owner (left of LaDawn) above- all good fun. Cost for 2 appetizers, salads, pasta course, an unbelievable cut of the most tender veal anywhere, veggies, two bottles of wine, dessert, and after dinner drinks - $60 each - unbelievable!!!

Hey gang, that's it for me today.  We head off to Rapallo Sunday morning via train to explore the northwest coast of Italy including the world famous Rapallo, Portofino, Cinque Terra region of the country.  More next week.  Have a great weekend and I'll see you soon.