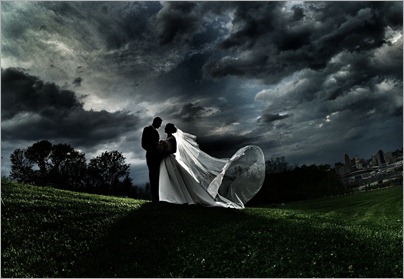 OK, maybe I'm a little weak on the title today, but I still really like this image.  It is one of my very first digital wedding images made over 11 years ago.  Yes, the sky looked something like that and yes, a soft gust of wind lifted the brides veil for just long enough for me to capture this photograph.

In it's original form, this image is very exciting to view.  It still hangs in my studio today.  But on the way up to New York yesterday I was playing with Snapseed, NIK Software's new iPad image adjusting app.  A few finger taps later I had his image - an image with quite a bit more drama that the original. How did I do it?  Simply by hitting the drama button on the app and scrolling through till I got the effect I wanted.  Yep, it's just that easy.

Julieanne Kost once cracked to me as I was waxing fantastic over Lightroom that I was just another "slider person".  I had to chuckle at her joke, it was all in good fun, but I admit it, I’m a "slider person" through and through and on the plane at 30,000 feet it's really fun!