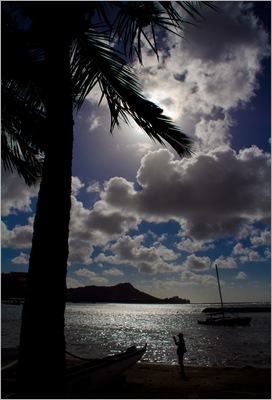 "The Tourist"
©David A. Ziser

This is not a typical image I post on my DPT site, but the image still struck me as a special Hawaiian moment.  We were cruising the beach yesterday morning just checking out our surrounds after our grueling flight in the night before.  It was great to feel and breath in the fresh sea air and feel the warm sunshine.  I, as always had camera in tow.  We were heading back to the hotel to prepare for last night's program and I pointed my camera towards Diamond Head.  I had a outrigger in the foreground , the palm tree silhouetted in the sun and Diamond Head in clear view.  I lifted the camera to my eye to take the photograph just when this gentleman walked into the shot, stopped, and proceeded to shoot some video of whatever he had just found interesting.  I waited, and waited some more.  He just stood there almost frozen just shooting his video. After a moment, I realized I was MISSING the shot myself. His placement in the composition was perfect for my shot.  I was able to fire only two shots before he finally moved on.  I wish I had realized earlier that there was a great story telling image right before my eyes.  Anyway, after reviewing the images yesterday, I thought this one image really told the Hawaiian tourist story, hence the title.  Camera specs; Canon 7D fitted with 18-200mm lens at 19mm, F 22 @ 1/1250 second, ISO 500.  Enjoy!  -David