Good Morning Everybody,
We had another fun crowd in Ontario, CA last night. Man, everybody loves the door prizes. We wrapped pretty much on time and I stuck around about another hour just visiting with folks about photography.

Today we head to Irvine, CA where a crowd of over 200 awaits us – San Diego tomorrow evening and then home for the weekend for a wedding and a couple of welcomed days off.

I think I have a informative post for our portrait shooters today so let’s get right to it. 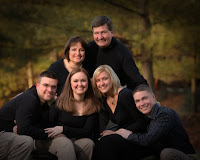 Hit the "Read More..." link below for the rest of the story.

This is because many photographers are using to small of an aperture when taking photographs when shooting their portraits. I learned a long time ago that there are three ways to draw viewers’ attention to the subject in a photograph. Those three ways are “light, color, and detail.”
So follow my thinking. If we focus on our subjects and at the same time use a fairly small aperture, the background then also is rendered in the fairly sharp focus. A lot of photogs think they need to use the smaller aperture to keep the subjects in focus. But that is not necessarily true – I’ll come back to that point later.

Here is another point to consider. It's always been my goal to avoid backgrounds with spotty bright light and sparse foliage where too much of the bright sky shows through. What I try to look for is a background that is fairly homogeneous in color and densities. That usually means that the landscaping, tree line, or whatever has to be dense enough to give me that nice smooth, attractive background behind my subjects.

Some additional problems to consider when working in the client’s own backyard is to avoid telephone poles and wires, neighbors houses, passing cars or other vehicles, signs, or basically anything that distracts from the scene. This is fairly easy to accomplish when working in the park because we are usually working in large enough areas whereby we can position the subjects far enough in front of a background and thus create the homogeneous harmony in the background I'm looking for when I make my portrait.

Take a look at at the image below. Notice how the background is not drawing attention to itself. 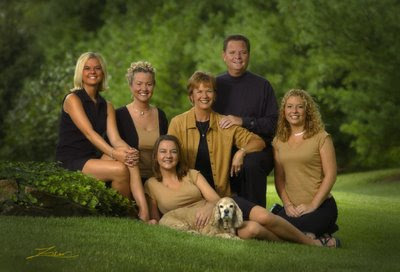 That's because my main rule of thumb is to shoot family portraits at F4 with my 70-200mm IS lens racked out to about 150 mm. At those settings my depth of field is quite shallow but, still sharp enough to keep everybody in focus. Keep in mind that I pose what I call a shallow family group no more than two people deep. But the shallow focus now makes my background go well out of focus because its distance is so far from the subjects.

Take a look at this next photograph and you can see what I'm trying to accomplish. This was just a simple family portrait that happened to be made in the client's backyard. 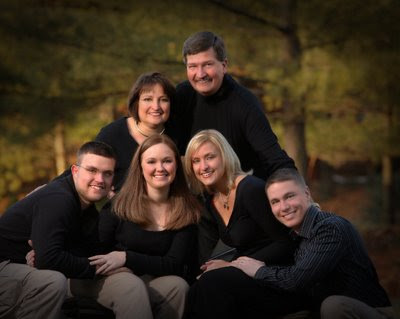 Their backyard joins several other backyards and I was able to position them in such a way that the neighbor's foliage served as my background. This image was also made fairly late in the year right after Thanksgiving in the Midwest. That means not much leafy foliage remained against which to position my subjects. I was lucky enough to find some evergreen pine trees, which served as my background.

Longer focal length lenses also allow us to find smaller areas of the background against which we can pose our subjects. What do I mean by that? I mean that the much more narrow view of my longer lens throw of the telephoto lenses gives me the ability to use a smaller background space for my portrait.

That's what happened in the portrait I’m showing above. There was just a small place in the background that I was able to zero in on with my long lens to have it serve as a nice out-of-focus background for this easy family portrait.

So the bottom line is this. Keep your subjects in front of a consistently uniform background. Be sure you don’t have distracting hot-spots in your chosen background. Keep the background sufficiently behind the subjects so it goes nicely out of focus at a wider f-stop. Simple, easy placement and positioning of the subjects. That’s about it. Have FUN!

I've tried to point you in the right direction in creating portrait images that are quite a bit different to what we normally see in our business. As I said earlier my goal is to create a wonderful, somewhat timeless, portrait that focuses on the client. We do this with background selection, lens selection, and aperture selection.

Next week we will discuss lighting the portrait. So again, on that note gang, I'm wrapping today's post. Were on our way to Irvine today then San Diego tomorrow and finally home on Friday. I hope to see many of you in Irvine, California tonight. See you then, -- David
Posted by David Ziser at 2:18 PM