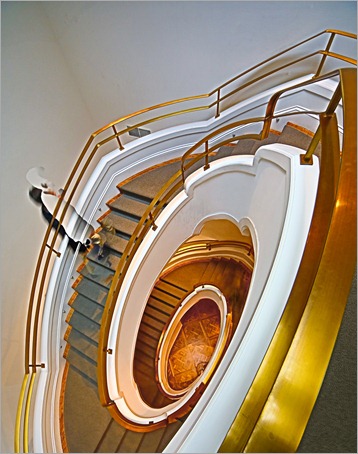 I captured this image during our visit yesterday to Duncan Phillips Art Museum in Washington, DC. As you can see I was using a very wide-angle lens – my Sigma 12–24mm lens on my new Canon 5D Mark III. The elliptical staircase reaching three floors high made a spectacular composition with my wide-angle optics.

I must've spent my first 15 minutes in the museum photographing the staircase. I photograph it from the bottom looking up and then from the top looking down. This image is one of the last images I made of the steps.

As I was framing up the image a museum patron walked into the scene. As my camera needed three frames to complete the HDR exposure, the museum patron was recorded in three different places during the three exposures.

After the in camera HDR processing of the final image, I was pleasantly surprised to see how the person was rendered in the final HDR image. His image was rendered with an almost out-worldly, ghostlike appearance.

As I look at the image again it looks as if my intruder is invisible showing only its shadow on the back wall of the staircase. Knowing that there is a physical presence of someone in the photograph without being able to discern who that person is I think, makes for a very interesting visual conversation.

The overall composition is obviously composed of the repeat of the elliptical elements in the architecture throughout the image. The secondary compositional elements, the highlights and the shadows certainly add additional interest to this image. It is the appearance of the mysterious stranger that adds the final punctuation/mystery to the finished composition.