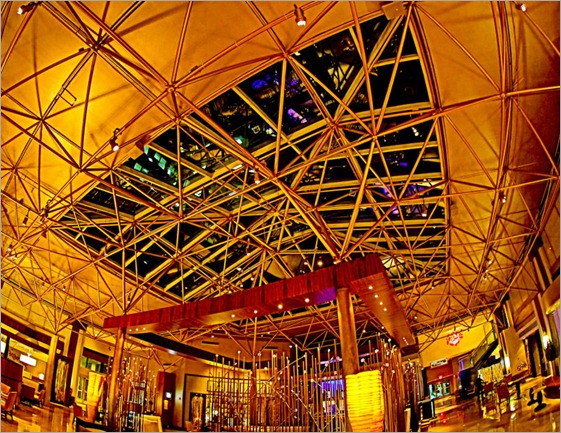 I captured this image late last night after we returned to the hotel from dinner. I’ve had the Canon 5D Mk 3 on my shoulder everyday since I unpacked it a few days ago.  I was really intrigued by the new HDR feature on the camera and decided to give it a try.

I set the camera to give me three images; one 2 stops under, the second at the normal exposure and the third at 2 stops over.  I also had the choice to set a picture style in the HDR dialogue and selected Art Bold.  I’m still not sure what all the settings do – heck, it was only my first try.

I framed up the Renaissance Marriott hotel lobby with my new Canon 8-15mm Fisheye and shot away.  One press of the shutter and a quick three shots fired from the camera.  It’s then a short 5 second wait till you see the image.  I have to say, for my first in-camera HDR experience, I liked what I saw.

The Fisheye lens certainly adds it’s own sense of the “dramatic” to the image, but the HDR effect also works well on this subject matter.  I left the camera on AWB and also like how the rich, golden tones were processed in the image.  I’m planning to do a lot more experimenting with the HDR setting today as we walk around the city.  Stay tuned.

P.S. You can see the standard image the unprocessed image below, what do you think?  -David 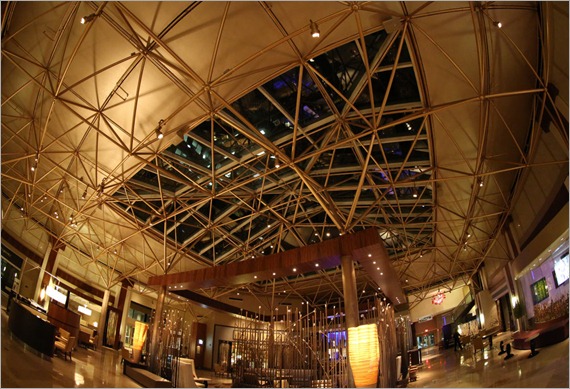