"And Liberty For All" 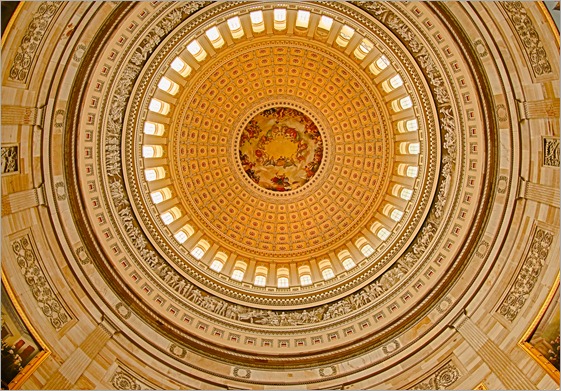 "And Liberty For All"
©David A. Ziser

You guessed it.  This image was made during our tour of the Capitol Building on Wednesday.  It was my first visit and I was impressed.  Heck, I even got a chance to catch a glimpse of Congresswoman, Nancy Pelosi and House Majority Leader, John Boehner. Like I said – right in the middle of it all ;~)

This image was made from the dead center of the rotunda.  I pointed my camera straight towards the dome 180 feet directly overhead, set my camera to HDR, and shot away. The result worked out quite well.  Notice that even with the use of the Fisheye lens there is no “give away” till you notice the curve of the framed paintings at the corner of the image.

I warmed the original image up in Lightroom 4 to give the image a softer feel but that was about the extent of my post processing.  Now do you want to hear the rest of the story.  If you look closely at the mural in the center of the dome, you can see George Washington holding court with heaven’s dignitaries. 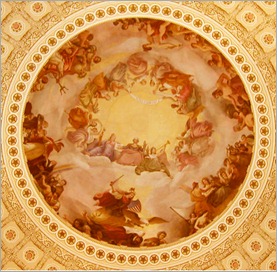 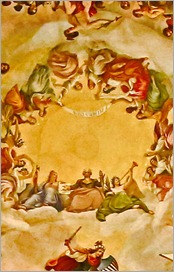 This mural is called the The Apotheosis of Washington. Brumidi, the painter, depicted George Washington rising to the heavens in glory, flanked by female figures representing Liberty and Victory/Fame. A rainbow arches at his feet, and thirteen maidens symbolizing the original states flank the three central figures. The word "apotheosis" in the title means literally the raising of a person to the rank of a god, or the glorification of a person as an ideal. George Washington was honored as a national icon in the nineteenth century. Just thought you might like to know.