"And Justice For All" 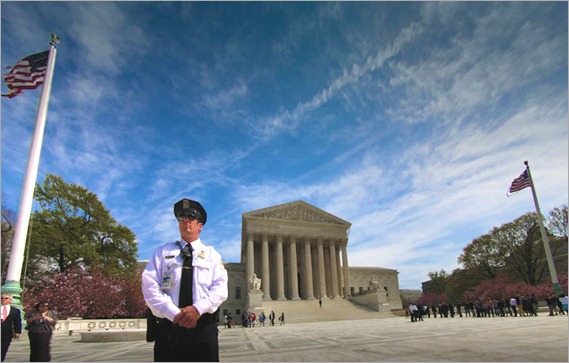 "And Justice For All"
©David A. Ziser
I captured this image yesterday after our tour the the Capitol.  With the Supreme Court hearings wrapping their third day of testimonies, quite a crowd had gathered on the steps in front of the Supreme Court Building.  I just had to head that way and take some photographs.  Hey, I was a child of the sixties, been there, done that ;~)

I got some great images of the cameras, protestors, and curious on-lookers.  It was kind of cool to be in the mist of this historical moment.  The Washington, D.C. police were on hand to be sure order was served and the assembled crowd did seem calm enough.

I asked the police officer, who was quite a nice guy, if I could get his photograph in front of the court building and he gladly obliged. I made the image with my brand new Canon fisheye lens but with judicious pixel manipulation in Lightroom 4, was able to remove the curvature of the Fisheye lens and straighten most of the vertical distortion.

I still left a bit of the vertical distortion for the added effect for this image.  I see the officer in the foreground, the American flags flanking and framing the image, and the Supreme Court in the background against the rich blue sky as “standing tall” and assuring “Justice For All.”
Camera specs: Canon 5D Mark 3 fitted with Canon 8-15mm fisheye lens at 14mm, F16 @ 1/2000 second, ISO 800.  Enjoy!  -David
Posted by David Ziser at 8:01 AM