A Long Day Of Shooting But We Got Some Great Images!

The third day of my Master Class is the longest day of the week. We begin class in the morning by reviewing everyone’s favorite images, reviewing lighting, posing, composition….. Then we look over my selection of images to recap again some of those same points I made during Monday’s class. The cool thing for the students is that we record these image critiques as MP4 files so that each class member can take home with them and review once again. It's a nice perk and everyone in the class really enjoys it. 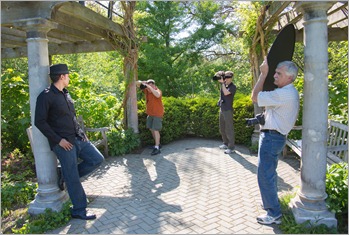 After lunch we loaded up the vans once again with the class members, the models, my coaches, and myself. We then headed over to Ault Park, one of the most popular parks in the city, especially for photography. In fact, while we were there yesterday, a photographer that recognized me came by and said Hi. He was photographing a young couple for their engagement session. We also bumped into another group, a Groupon class, who is planning to spend the evening photographing the beautiful horticultural aspects of the Park.

The park provides a lot of variety, both in lighting conditions and locations for the class to shoot. We cover everything from shooting in direct sunlight to working in open shade and also how to use light modifiers to get the best lighting on your subjects. This day is also the day where we have the models dressed in casual attire giving everyone the opportunity to practice on regular people instead of just brides and grooms. 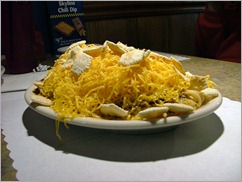 After a full day shooting in the park we took a quick dinner break at Skyline Chili for a Cincinnati favorite - chili three-way.  This is a culinary visit that every visitor to Cincinnati should make. Skyline Chili – nothing like your regular Texas chili –  is a regional Cincinnati flavor that you can’t get anywhere else in the country. I won't say that it's a “love it or hate it” taste but I will say that everyone in the class really enjoyed their chili tasting experience last night.

After our quick dinner break we headed to the riverfront in downtown Covington, Kentucky to finish out the day photographing our beautiful models against the Cincinnati skyline. This is kind of a fun way to wrap the day because, not only do we have a great background for the portraits, shooting a cityscape at nighttime raises a few lighting challenges for everybody.  Nevertheless, everybody has a great time and comes back with some terrific images. We wrapped the day about 9:15 p.m. and got back to the hotel about 10:00 – like I said, a long day:~)

In today's post I’d like to walk you through a few more images that I made during yesterday shoot. We'll get back  to our regular  Business Day Thursday post next week. In the meantime, sit back and enjoy the images below. 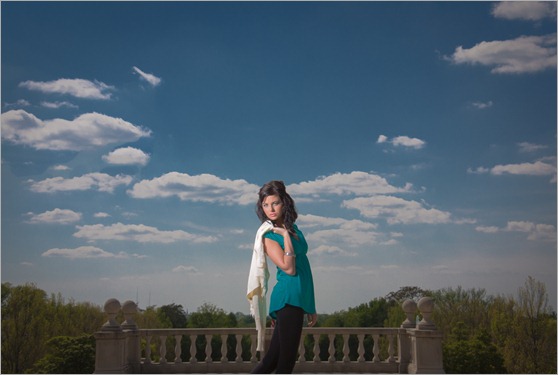 This first image you see above was made under the most difficult lighting conditions that we faced yesterday. It was about three o'clock in the afternoon and we were shooting in direct sunlight. The challenge comes from the fact that, if I want to capture some detail in the clouds and sky and, if I want to use off-camera flash,  I'm limited by the top shutter sync speed of my camera  which typically is  1/250th second. In bright sunlight that makes the aperture quite small – in this case about F16. I'll go into further detail on this image over the next few days here at DPT. Anyway, we pulled off a nice image in our very, very bright lighting conditions.

The photograph below is again very interesting because of the technique I used to capture it. The fountain you see behind our subject was illuminated by the direct light of the sun.  I chose to shade the subject with my Westcott 84 inch  translucent parabolic umbrella. That placed her in complete shadow which allowed me to add directional light with my off-camera flash, my Quantum strobe shooting through my Zumbrella, coming in from camera left. The off-camera gave me the soft, directional light I wanted on my subject. The low camera angle provided the cool repeating elements of the fountain behind my subject  resulting in a very nice portrait. 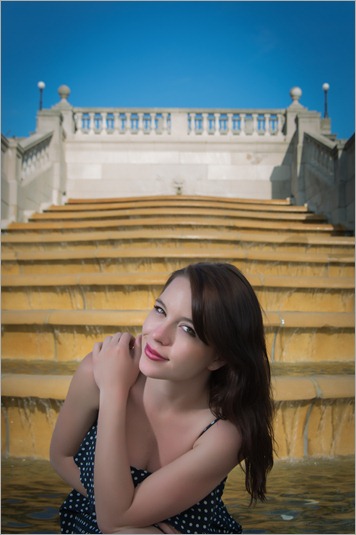 The next image was also made in front of the same fountain, albeit at a much greater distance. this time, in order to not have to deal with the direct sun illuminating my model, I moved her into a shady area of the lawn and next added my off-camera flash from camera left. Balancing sunny daylight exposure gave me a great photograph of both the subject with the fountain area behind her. The rich blue skies added to the dramatic impact of this image. 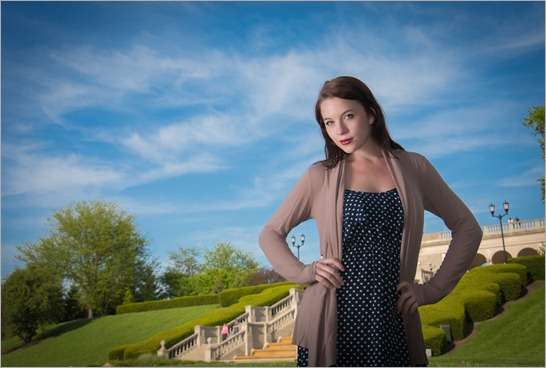 And now for the last image of the day. This is just a fun image that I took to wrap up the day’s shooting.  I wanted to get a photograph of all three of our models. Tarah, on the left,  suggested that we wrap up the session with the Toyota jump photograph. On the count of three Tarah, Anthony, and Dawn  all leapt into the air. I captured this moment at the peak of their leap. It's a fun photograph and, with the city in the background, certainly captures the enthusiasm that everybody had for yesterday shoot. 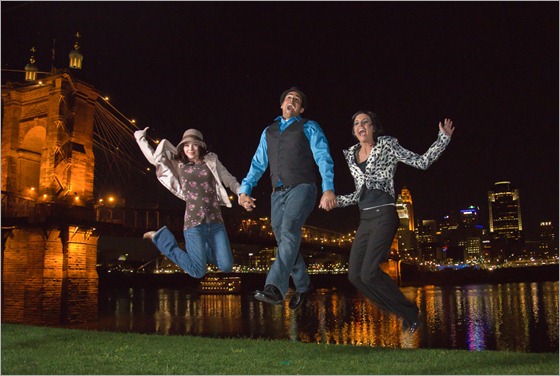 Hey gang, that's it for me today. Class is starting in just a few minutes so I've got to run. I'll plan to see everyone again tomorrow for one more short post wrapping up our experiences for the week.

Everyone have a great rest of the day. –David