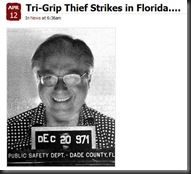 Hey, let's get right to it today.  I want to put this whole issue of false allegations behind me and move on. As you know,  Mr. Joe McNally made some semi- serious allegations about my walking off with his Tri-Grip "whatjamacallit" in his Monday blog post.  As I stated yesterday in my response [link], they were completely unfounded. I contacted my buddy, Snoop the Newshound, to see if he could get to the bottom of all this.

Well, get the the “bottom of it” he did.  It’s a sad, sad story, but still one that needs to be told.  I don’t want to spill the beans. Since it’s Snoop’s story, I’m turning DPT over to him today. Please read on.

Snoop’s – The Rest Of The Story – Case Closed 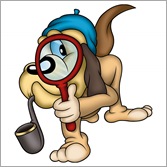 Hi folks, you may not believe what I'm reporting today, but I promise every word of it is true-blue true. I'd stake my buried backyard ham bone on it.  How did I get all the facts?  Let's just say there were a lot of trash cans to sift through to get the "skinny" on Mr. McNally.

Here is how the rest of the story has unfolded – sad, but true.

I started following McNally on Twitter and Facebook.  You know, nothing’s private on those sites and I was quickly able to track Mr. McNally down in a small little town in upper New York state. I promised the owner I won't divulge the exact location.  He thought it might be bad for business once this story got out to the presses.

It was a dark, moonless cloud covered night, not a star in the sky.  A soft mist blanketed this small little town I now found myself in. There was only one restaurant left open – not a dive, but just a little diner, just looked a bit greasy with smudges on the glass, spilled coffee on the counter, and the waitress with the poofy blond hair waiting on the remaining desperate souls sipping their last sip of coffee while taking the last drag on the nearly finished cigarettes.

There he was with a pretty and petite young woman – Annie, I think I heard him call here. As I watched discretely from the curb near a fire hydrant close by, I noticed something very strange, right off the bat.  McNally was always grabbing for the hot sauce and putting it on his french fries.  Who puts hot sauce on french fries?  I could hear a voice say, "Joe, that's not the catsup, that's the hot sauce! You're going to burn out your tonsils." McNally replied, "I know, I know – I’m so forgetful since the surgery." “I know honey.” she said, knowing things had been tough going since then.

Turns out the cute girl was McNally’s wife.  Yea, she looked concerned. But what’s this about surgery – what surgery?

That got ol' Snoop thinking.  How could I find out about McNally's surgery?  I had it, Facebook and Twitter again, the open book on everyone’s life in the world.  I poured through thousands of posts, wall comments, tweets, and yes, even hundreds of blog comments from McNally’s site.  There it was in front of me, Joe McNally’s entire life. And Yes, there it was - the post, the dates, the locations, and the reasons for the surgery!

Seems Joe had been getting a little forgetful lately.  Everyone had been noticing it.  I called his buddy Moose Peterson.  They do the Photoshop World Pre-Con together.  Moose told me that even during their Pre-Con shoot at the Columbia Restaurant, a popular Spanish restaurant near Tampa, Joe didn’t seem himself.

He said, " I don't get it.  Joe's always been a sharp guy, but he seems to be slowing down a bit lately.  He's getting real forgetful too - kept using the Habanera sauce on his fries instead of the catsup at that Tampa restaurant.  He kept saying something about some minor surgery he had.  I was worried for the guy."

Something was up – what was this surgery about??  I followed my leads to a small hospital outside a small town in New York.  Seems they do specialized brain surgeries of celebrity photographers.

It was late, most of the staff had gone home for the evening.  The lone nurse had just left the nursing station and was making rounds.  That was my chance.  I snuck behind the desk, fired up the computer and brought up the patient records for the last three months. There it was – the record of Joe McNally’s stay. It seems the problem was related to the use of small strobes.

I don't understand all the medical mumbo jumbo but the doc scribbled "Photon Induced Amnesia" on Joe’s chart.  I called the doc at home to get the scoop. It’s a small town – he took the call. He told me it's a common ailment for the guys shooting all the small strobes these days.  It seems firing one or two strobes at the same time is OK.  It’s when you start hookin' up - I think McNally calls it "syncing up" more than two that you can find yourself in trouble. 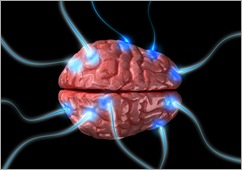 I wanted to check it out.  I pulled a few PDFs from the net and read the directions on how to use these small strobes.  Sure enough, there it was right in the directions - "Do not fire more than 3 strobes at the same time. If you must be in close proximity when firing more that 3 strobes, wear the proper head gear to avoid "Photon Induced Amnesia!!!"

I knew that had to be it. I googled "Photo Induced Amnesia" and there was the whole story with diagrams.  Let me see if I can get this straight - bear with me, I'm no scientist – here goes. It seems that when you fire lots of multiple strobes at the same time that the "energy amplitudes" of the photons can occasionally combine. This is dependant on their distance to each other when firing thus creating super charged photons that, in some cases, can penetrate the cranium reaching the brain itself.  There was a small footnote about how some craniums are easier to penetrate than others. No, I'm not drawing any conclusions here.  I’m just reportin' the facts. 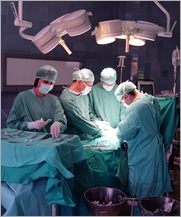 These super charged photons reaching the brain create a temporary disruption of normal brain function leading to "Photon Induced Amnesia."  Recovery is quick on younger photographers but the older the photographer is, and the more flashes fired, the longer the recovery period.

Seems McNally was taking a little longer than usual to recover this time around and they decided to proceed with a very sensitive brain operation on him.  The operation is called Sub-Cerebral Photon Neutralization.  During the operation a med student grabbed this shot of our photog in question.  Looks serious to me. 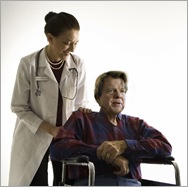 The docs told me McNally came through the surgery OK. He should have a normal recovery.  Turns out that the surgery was right before Photoshop World.  McNally was spotted with his nurse just days before he was to leave for Orlando.  His docs advised against making the trip, but there was no stoppin' the man.

Seems he first booked his trip to Tampa thinkin' it was Orlando, but he finally got the tickets switched and finally made it to Orlando. I bumped into Joe the next day at our Pre-Cons. I think the Photon Induced Amnesia explains a lot of what was going on with McNally at PSW - forgetful, not thinkin' straight, FORGETING ZISER RETURNED THAT Tri-Grip "whatjamacallit" the morning of the opening ceremonies of PSW.

I mean, I even uncovered a witness to Ziser returning the Tri-Grip "whatjamacallit".  DSWfoto commented on McNally’s own blog early Monday at 7:10 a.m. saying, “Mr. Ziser did borrow a reflector of Joe’s which I vividly remember seeing returned prior to the keynote.” – proof positive that Ziser, a well dressed person of integrity and true to his word, did indeed return the Tri-Grip "whatjamacallit" as promised.

Yea, I knew I'd get to the bottom of this – but still kind of makes you feel sorry for the guy.  I've asked my buddy, Ziser, to go easy on the guy. I mean, think about it, Joe has so many flashes and, if he keeps firing them without proper head gear, he may have so little time left.

I saw some of his photography work in that new book of his “Hot Shoe Diaries” - not a bad shooter either.  It’s be sad to lose him permanently to Photon Induced Amnesia.

Hey everybody, that’s the report from Snoop, The Newshound. I’m glad we got to the bottom of this finally and cleared the air, and Ziser’s name, on the who thing.  Back to you Mr. Ziser….

I want to THANK Snoop for his report.  It kind of sheds a brand new light on the subject.  Joe has just seen way to many photons in his life.  He needs to slow down, wear the proper head gear when shooting all those little strobes.  If he doesn't take the proper precautions, we might loose him. 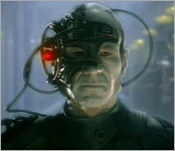 I feel bad now knowing all the facts – maybe I over-reacted. I want to personally apologize for any hard feelings I had for the guy. In fact, I think we all need to reach out to Joe.  We need to encourage him to wear the proper flash head gear when shooting all those multiple flashes.  He needs to instruct and explain to his multiple flash shooting students of the dangers they face too if improperly protected.

I mean, I'm happy to send him another Zumbrella or two.  My Zumbrellas were designed to absorb the PIA photons and only transmit the “safe” photons to make the shot. You know Joe, when you get my Zumbrellas, be sure to turn to Chapter 4, page 52 of my new book “Captured By The Light” to see how to use strobes safely for all your future shoots.  Good luck buddy. And, BTW, doesn’t all that baby oil get all over the rest of your gear;~)