Guest Blogger Wednesday: So Easy, Even A Caveman Can Do It

Things are pretty much back to “vacation normal” after LaDawn’s motorcycle mishap on Monday and time is flying by way to fast down here in Mexico, but we are having a great time.  To ease my blogging responsibilities for this week, my Ace #1 Assistant, Nicholas Viltrakis offered to clone me today.  Thanks a bunch, Nicholas – very much appreciated by me and LaDawn.

Nicholas and his wife Terri recently took a little vacation to Mammoth Caves, one of the wonders of the world – it really is. Nicholas didn’t like the result he was getting with his on camera flash.  He decided to try a few on my on-camera flash techniques to see if he could get a better result.  But, why don’t I let him tell you the rest of the story.

Take it away, Nicholas…

So Easy, Even A Cave Man Can Do It

As many of you know I’ve been helping David for the last few years  and I think I’m finally beginning to pick up some of the “how-to” of practical lighting. Canon is not exactly throwing gear at me for endorsements, so in the mean time… I’ll have to do it with less. Which brings me to the point of this post; my vacation to Mammoth Cave National Park in Kentucky. 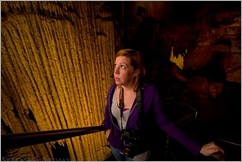 Terri, my beautiful wife, wanted to see Mammoth Cave for her birthday this year and how could I say no? I mean, any scenic place, I’m there with my backpack crammed with 30lb of gear and two light stands! Portraits anyone?

Guide: What do we know about caves? Anyone? You there in the back?

Tourist: Well they’re holes in the ground that are cold, wet, dirty, and DARK! 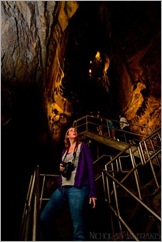 Which brings me to my next point; Portrait lighting in a cave just isn’t easy. Let’s face it most of us aren’t ever going to have someone book us for an event or portrait in a place as difficult as a cave, but the principles and techniques behind great portraits are the same in any situation!

Guide: Does anyone know what makes Mammoth Cave different from other caves? 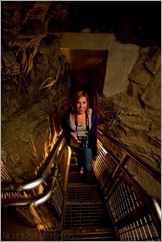 Tourist: There are people waiting in line all day to be hurriedly herded through this particular cave?

As if that wasn’t bad enough let me remind you that all of these portraits of my lovely and patient, patient wife were taken with the time constraints of a crowded “Historic Cave tour” or “Diamond Caverns tour” the latter of which our guide, Brent, claimed to have lead 18 times in one day. (Not a lot of “Hang on Mr. Park Ranger, I just need 30 more min to get my lighting right” going on.) 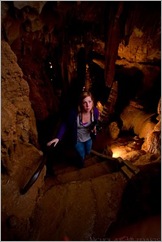 What did we do? Well, I had the backpack of gear, but backpacks of any kind are prohibited on all Mammoth Cave tours. So I did what any photographer worth his salt does going to a concert or museum… I loaded my pockets down with lenses, a speed light, and a head-full of the teachings and spirit of David Ziser.

I have to explain to most people who ask me questions like “What’s the most valuable thing that David has taught you?” that, yes I have learned composition, lighting, and the math of the camera from David, but the most important thing I am beginning to realize is the attitude of “Make it happen!” 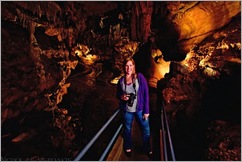 (Tell you the truth we just used David’s side bounce technique, like this, and set the color balance to tungsten because the rocks were orange, but the story above… THAT’s way cooler!) 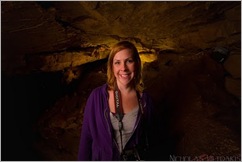 Here’s the math: I call this the side bounce technique because I had one of my inexpensive wireless radio transmitter/receivers (I mentioned in a previous DPT post) with me too for added distance, but the technique is exactly the same. For the most part the setup was my Canon 580EXII pointed at the cave wall 1/2 or 1/1 power. Camera: Canon 40D at ISO 800, F3.5 (10-22mm), and 1/3 sec hand held! Yep, the flash is fast enough to freeze the subject and if the background was a little fuzzy it was ok. Heck, we were in a cave! I could even make cool effects like this: 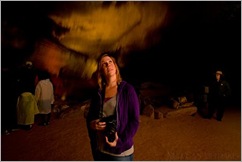 The obvious lesson here is that, “Even a caveman can use David’s on camera lighting techniques.”

p.s. Don’t forget to check out Nicholas’ website right here and his weekly blog right here.  Thanks a bunch Nicholas!

Email ThisBlogThis!Share to TwitterShare to FacebookShare to Pinterest
Labels: lighting, on camera flash