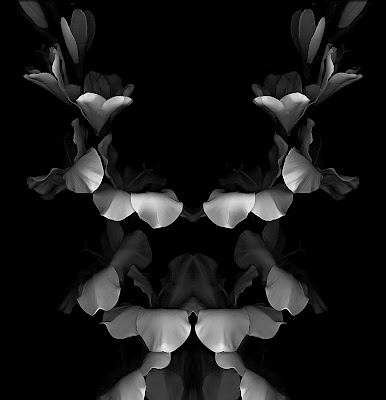 "Rorschach Bouquet"
©David A. Ziser
I created this image two days ago at my studio. Yes, the operative word is created this image. No camera, lenses, or flash was used in creating this image. In Monday's post I mentioned a visit to the Easton Art Fair a few weeks ago. I commented on Earl English's wonderful images he had on display in his booth. Many of Earl's images were created with a simple digital scanner.

I loved the effect it gave to the resulting image. Because of the extremely shallow "depth of light", the light fell off so quickly and gave this images a completely different kind of look than what I had seen before.

I decided to give it a try for myself on Monday. I simply grabbed one of the artificial flowers that we have on display at the studio, laid it on the copier, and "exposed" my image. I then brought the image into Photoshop, cleaned it up slightly, and enhanced it a bit with the "Levels" control till I had a tonalities exactly where I wanted them.

Although I was excited with my image at this point I wanted the final composition to fill a larger space. I have a handy little Photoshop action that, at the press of a button, will give me a mirror image of the original. That is what we have here. I love the final result. To me, it is reminiscent of the old ink blot tests, or more specifically, the Rorschach tests.

Click on the image for larger view and then spend a few minutes just viewing it. I find I quite enjoy the experience. Time to play some more with this technique - thanks Earl. "Camera specs; Flowers copied with a Xerox C2424 Workcenter and saved in JPEG mode. Image was opened in Photoshop, converted to black and white, and adjusted with the "Levels" control. Image was then flipped and rejoined with first image to create the final result. Enjoy! -- David
Posted by David Ziser at 11:29 AM