Good Morning Everybody,
This could be considered the biggest day of the year in the United States and the whole world is watching. It's the day we are privileged to vote for President of the United States and I'm excitedly heading out shortly to cast my vote. Today is the second time I've voted this week. I know what you are thinking, "OK, Ziser, what's up with that - what do you mean voted twice?" Well, folks I have said on a number of occasions on this blog, that Kentucky is really the center of the universe as we know it.

That was proven this past Sunday as LaDawn and I were watching our favorite Sunday morning TV show: CBS Sunday Morning. It was the last segment of the show - Bill Geist's story of the mayoral election taking place just south of us in the colorful little town of Rabbit Hash, Kentucky. Rabbit Hash is really known as the Center Of The Universe, but heck, we are only 10 miles away - so that's close enough for me.

It seems the town's last mayor had to be euthanized - yes, it's legal in Rabbit Hash, Kentucky to euthanized public officials! Watch this short movie for the rest of the story, just click on the movie to view it - here is the link. Bill Geist’s CBS Sunday Morning's story “Top Dog” feature, taped Oct. 4, was about nine dogs, a donkey, cat and at least one human named Alex seeking to replace Mayor Junior Cochran, a Labrador retriever who died in May. Here is the whole story right here. Mr. Geist reports that “the claws are coming out” in Rabbit Hash, where “these candidates are are behaving like animals.” I had to see this for myself and LaDawn and I headed to Rabbit Hash in the early afternoon.

The town was jam packed - of course that's because it's only about two blocks long and there were about a 25 cars and 500 motorcycles lining the street parked in every "No Parking" space available. You can check out a few of the Rabbit Hash, KY photos I took right here. 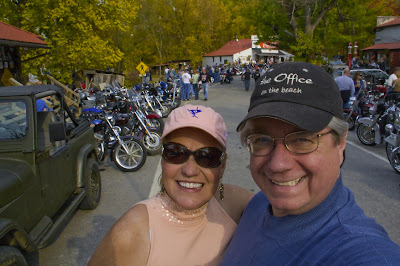 Hey gang, all kidding aside, this is a "hoot" of a story, and since it's election today, I think it fits appropriately into the blog post this election day. Hit all the related links and start your day out with one of the best "election giggles" ever. Then you can be serious for the rest of the day;~)