It's Revelations Monday: 8 Hours With The Canon 5D Mark II

Good Morning Everybody,
Yep, it's true - I had my hands on a Canon 5D Mark II for about eight hours this past Saturday. I mentioned last week that we had another double-header weekend. By the way, no major accidents, so I feel the jinx is over.
As it turns out, my friend, Mary Mannix, who is also my Canon rep, was in town on business Thursday and Friday and then driving on to Columbus on Saturday. I had to ask, "Could I give the new 5D a quick wedding workout on Saturday?" She said yes, dropped the camera off right before we were to leave for the wedding making me promise to get it back to her by 10 a.m. on Sunday.
What could I say, I had the camera in my hands, so I agreed. Meet with team at 11:30 for briefing and review; wedding - on site at 1:15 p.m.; shoot till 5:15 p.m.; proceed directly to country club to finish Bar Mitzvah coverage and wrap at 11 p.m.; head back to wedding to pick up my team - we leave wedding at 1:00 a.m. and head back to studio. After unpacking gear, grabbing some food and a few cold ones with everybody, I head home, recap the day with LaDawn and finally hit the sack about 3 a.m. Whew! The alarm goes off at 6:30 a.m.; I grab the camera and LaDawn and I head to Columbus where I do a "hand off" to my buddy, Kent Smith. He gets it to Mary on time!
Would I do it again to get my hands on that camera? As a recent high profile political candidate said so many times, "You bet cha' !" The rest of this post is not going to be a blow by blow account of the 5D's capabilities - let's leave that for DPReview. What I do what to share with you are my most immediate observations from my first experiences with the Canon 5D Mark II.

How High Is High When It Comes To ISO?
Everybody knows I'm a speed junkie so for me the big question is how much can I "goose" that ISO and still capture a good picture? So how far could I go with the 5D Mk II? OK, folks - here it is - how about 3 stops higher than 800 ISO!!! Let me re-phrase, as Law and Order Jack McCoy would say, at 6400 ISO, I'd say I see the same noise characteristics as I see currently see on my 40D at 800 ISO. When I run Noise Ninja on both the Canon 40D and the 5D Mk2 file at 6400, I'm am getting the same "noise index" number. That calculates for to me to be the same amount of noise in the two images. Only thing is, one of those images was exposed at 6400!!! That means, dear readers, the the old 800 ISO is the new 6400 ISO!!!! The image of the violinists was exposed at 6400 - straight out of the camera. I've added the histogram for reference. 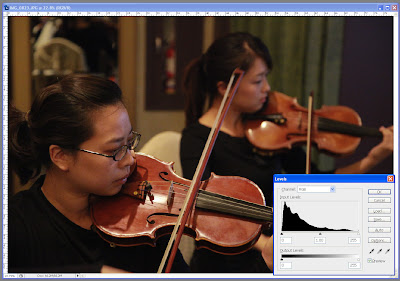 Turns out, this was the lowest ISO I used all day and night. And, I have to say unequivocally, that it was about the coolest way to shoot for me in recent times. I was able to shoot in extremely low light at a fast enough shutter speed to still get the shot!! Wait, there's more. My main lens was Canon's 24-105mm IS lens - yep, you heard me right - even with the smaller aperture, the super fast ISO still let me get the shot - AMAZING!!!.

I continued to shoot some available light images at the Bar Mitzvah celebration and found that I could still get extremely usable results at, are you ready, at 12,800 ISO!!! Sure I had to run a little NIK DFine 2.0 noise reduction on the image, but it looked fine after that. Check out the image of the young boy on mom's lap. 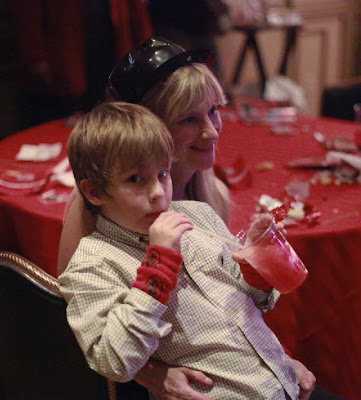 I ran a few tests at ISO 25,600 - at that ISO the image can look sand blasted in contrasty light, specifically images that have a lot of dark grey and black tonal values. Check out the first image of the dad holding his son straight out of the camera. I then ran this image through Noiseware, lighten it a bit, and color corrected it slightly. Check out the second image here. 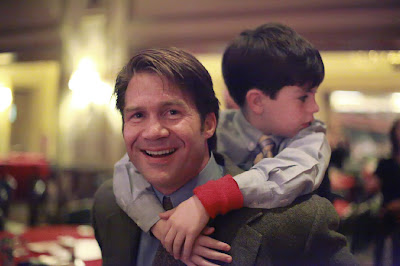 When I look at other images with the lighter tonal ranges, I received a better result. Look at the straight image with the cell phone - no noise reduction - taken at Bob Evan's restaurant the next morning - not bad. A lot of A/L stuff at weddings has lots of shadows that would make this ISO a bit problematic. Another factor that comes into play is what "color" of light is hitting the subject. In the party pictures above, the strong gelled colors of the party add to the noise issue. It's my guess that this is much less of an issue, even at this 25,600 ISO, in a more neutral color setting. I'll have to run more tests to verify my hypotheses. I wish I had more time to tweak the camera settings to see if I could have ameliorated the noise a bit more too - maybe next time around.

How's It Shoot In Low Light?
OK, keep in mind, I'm using the 24-105mm IS for most of the images I was shooting. I found the 5D Mark II did a fine job finding and locking focus - MUCH better that the first 5D. When I switched to my 50mm F1.4 there was no problem even in very dark areas. I was not a big fan of the first 5D for reception coverage because it just would not focus for me as quickly as say, my 30D or 40D. While I consistently use the 5D for alter return and family groups, I've always switched to previously the 30D and now the 40D for reception coverage.

Shooting Speed
I always have to giggle when I get my 40D inadvertently set on it's high motor speed - it just flys for me. The old 5D was a bit sloooow. The new 5D Mark II is substantially faster than the old one, but still not as fast the 40D in high speed mode. But, let me say, it is fast enough for me to now use it for my reception coverage.

Yes, I did try the video
But only briefly. Here is the kicker - you need one of those new super fast UMDA cards for the camera if you plan to shoot video. Why? Because the camera can't write fast enough to the Extreme III and similar cards. The camera's buffer fills up and the video shuts down when the buffer reaches full capacity. Plan to spend a few bucks on a few fast cards if you don't already own them and want to play with the video. As soon as I get a chance to play with my short little videos, I'll give you an update.

Know Your Computer, Know Your File Size
Here is another instance in this digital technology that makes me smile a bit. Maybe you've experienced it yourself over your last few digital years - the computers seem to run more slowly, plug-ins seem to take more time to run. Heck, even saving the file seems to take twice as long. What's going on here? IT'S THE FILE SIZE!!!!

My first digital camera, a Fuji S-1, created a 3.66 meg file that opened up in Photoshop to about 18 megs. No big deal. My 40D images open up to almost 29 megs - almost a 50% increase in file size. No big deal, we upgraded to dual core Pentiums with 2 gig of ram on most of our machines - things were snappy again.

OK, now get ready to hold on to your hats. The 5D creates a fine res JPEG that is 10 meg BIG and opens up to a 60 meg file in Photoshop. Hey gang, that's a bunch of pixels moving through your computer and network. Jump the layer to do a little retouching and now you are looking at a 120 meg file - layer cake retouchers beware, especially if you are working on a slower machine. I mention it because the larger file size does impact your computer's perceived performance.

I need to note here - I made all my images from the 5D Mark II in JPEG mode because these images were for real clients, Lightroom and Adobe Camera Raw don't yet support the camera's file format. That should be happening a few weeks down the road once the camera is finally shipping. I didn't want to jeopardize our workflow around here so I stayed on the JPEG side of things this time around.

Quick Conclusions
I can't wait to permanently get my hands on this baby. The phenomenally high ISO capabilities promise some unbelievable benefits especially to us event shooters. The video capabilities, as I've said before, also open many new doors of opportunity that we don't even yet understand. All way cool stuff - a great big THANK YOU! to Mary for allowing me to take the Canon 5D Mark II for a spin around the track. It's an easy two "Thumbs Up" for me!

News You May Have Missed
I was going to run this last week but ran out of space. If you get a chance, head back over the Crash Taylor's site [link] where he is doing his series of interviews with fascinating photographers. He ran an interview last Tuesday with Christian Pondella, an amazing sports photographer. You've got to make the trip just to see this guys work - unbelievable.

Hey gang, that's it for me today. I've got weekend images to check, books to write, and muscles to mend. See everybody tomorrow for another Technique Tuesday. See ya' then. -David
Posted by David Ziser at 4:39 AM