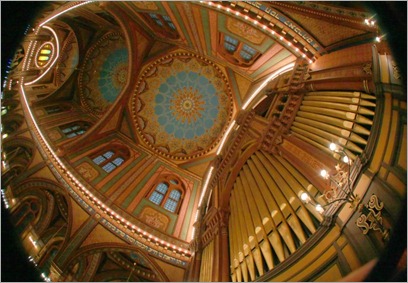 I captured this image at a wedding I photographed a few years ago. It was taken from the balcony at the historic Plum Street Temple in downtown Cincinnati, Ohio. It is always a true joy to photograph in this beautiful location.

I love that the image literally shows the interior from front to back, accenting the magnificent detail of the vast ceiling. Some folks may have an issue with the fisheye effect but I don’t.  I really like what the Fisheye brings to these spectacular interiors.  It’s a sense of perspective not seen very often which, I believe, adds interest to the client’s finished album. BTW, I slightly increased the shadow detail and saturation in Photoshop.