I can't believe it, we been in New Orleans for three days and I think I've already put on 5 pounds and that's even trying to avoid some of the fabulous, rich food that is so delicious. So much for the diet when you're in New Orleans – that's for sure!

We landed in NOLA late Thursday morning, got settled and began walking the French Quarter to just get the lay of the land. The rain was looking to wash out our walk so we took cover under the waiting area for the Natchez Riverboat Cruise.  We saw 5 young kids take cover as well.  It turns out that were aspiring jazz musicians and before long were jamming for the crowd. A fellow who was a cook for one of the restaurants was on his way to work but stopped long enough to join the musicians and before long had the entire assembled crowd sing “When The Saints Come Marching In.”  Check out my video below.  It was a way cool experience!

New Orleans has always been one of our favorite cities to visit – the people, the culture, the colors, the smells, the food, the history, friends in the area and so many other great things about this wonderful city is why we enjoy it so much.

Friday I was up bright and early, did a quick 5 mile walk up the Riverwalk and enjoyed a beautiful sunrise over the mighty Mississippi. Then it was back to the room to get ready for my wedding shootout class.

Thanks To The Rain, My Wedding Shootout Was Pretty Exciting

I was excited about the class because, because B&H had just sent me three brand-new Canon 600 EX-RT speedlites to play with. I was planning to give them a good workout during my class. Confidentially, after just a few minutes shooting with them, I have to tell you, they were wonderful! But more on that later. 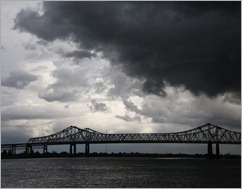 We spent the morning portion of the class going over the lighting and compositional concepts I like to review and discuss before we actually head-out on a shoot. Think of it as sort of a warm-up for our location session. My good friend Ralph Romaguera, lined up a gorgeous church for us for our afternoon session but, as luck would have it, the bad weather rolled in and it looked like it was going to be far too difficult to keep the bride and all of us dry in trying to relocate to the church location.

We quickly switched to Plan B and decided to stay inside and shoot around the hotel instead. Don't get me wrong - the hotel turned out to be a great place to shoot . It had a fabulous staircase, wonderful second floor balcony area, and large, beautiful windows overlooking the Mississippi River.

We made great use of all the locations within the hotel and captured some fabulous images for our bride. It turns out my model was actually a beautiful young lady who is going to be an actual bride in just about four weeks. She was wearing her actual wedding gown, had her wedding day hairstyle created by her beautician and even asked her florist to make a duplicate bouquet like the one she would be carrying on her wedding day in August. So, the bottom line was this. With our beautiful bride in a great location, we captured some fabulous photographs for her. 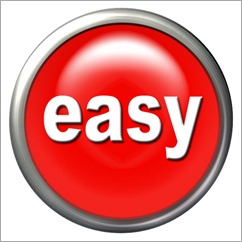 That's right, after my experience with the brand-new radio controlled Canon 600 EX-RT speedlite units, flash photography and off-camera flash has now become the easiest thing in the world to accomplish. Anyone reading this blog knows I am a HUGE proponent of off-camera flash – that is putting a directional light on the scene and the subject to capture detail and dimension in every photograph.

I was a bit hesitant not knowing what to expect in using the new flashes. And, as with anything new, getting started, learning the equipment, adjusting to a new routine, (especially in front of a class) at first may seem quite daunting. But, I have to admit, after grabbing the manual, reading and reviewing the settings for approximately thirty minutes, I was off and running and very surprised to see just how reliable and consistent those early results were.

So, here we are on my wedding shoot in New Orleans. How are the Canon 600 EX-RT speedlites going to handle?  Were they going to be difficult to adjust to obtain the correct exposure?  Would they be easier or more difficult to use than my off-camera Quantum flash I’ve been using for so many years?  My initial “out of the box” experience answered all of those questions and more.  The new Canon flashes are the easiest strobe units to use that I've ever experienced in my life. It simply is a matter of turning them on, setting the on-camera flash to Master mode and the off-camera flash to Slave mode and start shooting away.

The strobe units, when “talking” with the camera, produced images that were exposed beautifully – the entire process was effortless and uncomplicated. I was never a big fan of the optical system of the 580EX II strobe units.  They were great as regular strobes but I never found them to be as reliable or practical as I needed when photographing my weddings. The new radio controlled Canon 600 EX-RT speedlites are a completely different animal and, after my experience on Friday, offer a brand new, very compact, easy and efficient way of photographing my weddings.

OK, Time To Give Them A Try 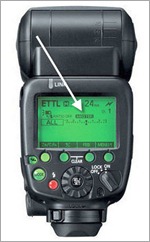 I had one class member hold the strobe, while mounted on a mono-pod, off-camera creating the loop lighting pattern on my subject's face that I'm always looking for. I made my first exposure and it was perfect. I was surprised that is worked so easily! Notice the sharp edged shadows on the back wall – that’s because of the small light source used for this image. 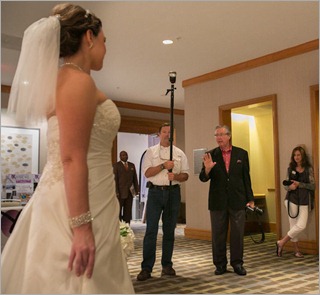 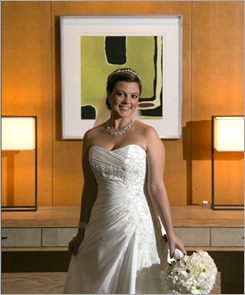 The next setup was to shoot the Canon 600 EX-RT speedlites through my Zumbrella and see if I could obtain the same result.  We attached to the mono-pod my umbrella adapter and threaded the Zumbrella in place.  I also positioned the 600 EX-RT wide-angle diffuser over the front of the flash to get the maximum spread of light from the flash through my Zumbrella, and then fired away. Once again the exposure was perfect. Also notice how my Zumbrella softened the background shadows very effectively too. 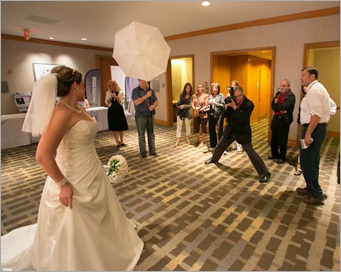 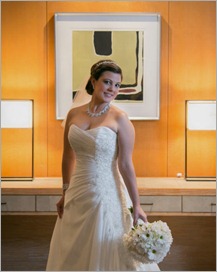 After that quick opening volley of lighting success, I decided to add the Westcott 84” Translucent Umbrella in front of the 600EX-RT.  Could I still get a consistently accurate exposure? I had to have LaDawn hold the large umbrella about 5 feet from the umbrella to get the small strobe to fully illuminate the umbrella.  Creating a photograph with such a large light source really gives you a very soft light on the subject.  Not only was the light very soft – no shadows at all, the exposure was just right too.  Amazing! 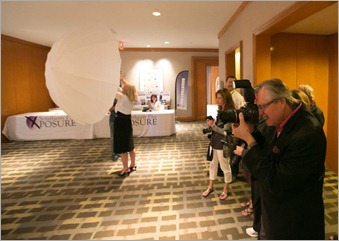 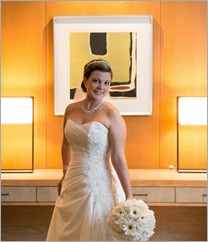 We spent the rest of the afternoon working our way throughout the hotel finding the best locations and capturing some amazing images.  I’ll follow up with another post showing more those results. You will definitely want to tune in ;~)

OK, fast forward to last evening.  I was one of five photographers at the convention conducting a small workshop with the convention attendees. In my relaxed workshop we discussed all things concerning wedding photography.  During the two hour program I made a comment about how technology is constantly making our job easier.  I decided to further demonstrate my point with my Canon 600 EX-RT speedlites.

I asked LaDawn to place one of the 600EX-RT’s into a small shopping bag she had with her. The flash was set up exactly as it was the previous day for my wedding shoot.  I figured after my Friday flash success, I could place the strobe into anything even slightly translucent and turn it into a soft box – why not a white paper shopping bag?

I then had LaDawn position the bag containing the radio slaved Canon flash next to Ronnie, one of the class members.  I wanted it’s placement to give me my standard loop lighting pattern on my subject.  Once everything was in place I fired away.  So what do you think of my new paper bag soft box?  Heck, maybe I should call it a bag box ;~)  Anyway, you get the idea just how easy it NOW is to use off-camera flash thanks to Canon’s introduction of their brand new 600EX-RT radio controlled strobes. 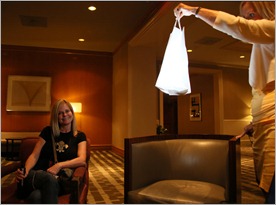 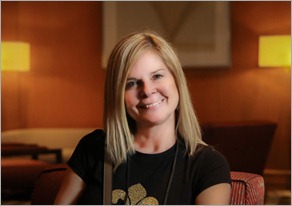 Hey gang, that’s it for me today.  We’re out the door early to catch a program or two and then hit the trade show.  Then it’s off to see some of the New Orleans sites and sounds and probably partake of the over abundant edible goodies here in the Crescent City.

Have a great rest of the day and I’ll see you soon,