"Making A Forth Of July Exit" 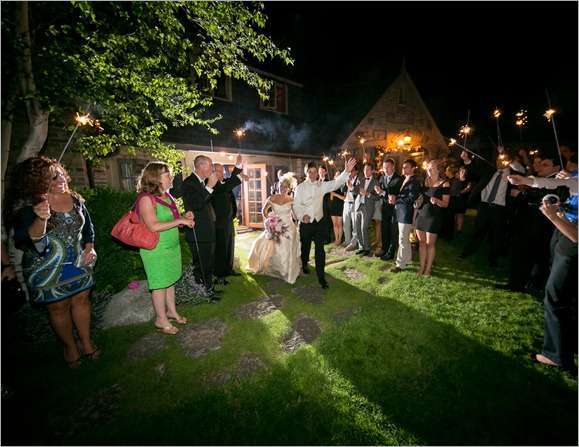 "Making A Forth Of July Exit"
© David A. Ziser

This image is one of the last images I made during this past weekend's wedding. Just like her brother's wedding a little over year at ago, the bride decided to make the grand exit with her groom with sparklers a-blazing. Everybody was holding the extra long, giant size variety which  would assure that the sparklers would stay lit for the entire exit.

This can be a tricky photograph to set up. The reason for that is twofold. First, I want to be sure that I record the sparklers adequately.  Next, I always like to add the back-lighting to the scene which just adds a greater sense of the dramatic to the scene.

I had my assistant, LaDawn in this case, hold my Quantum strobe which was set at 1/4 power. Next I figured that I could get by with a higher ISO and chose 6400 ISO. I figured that high ISO would easily capture the sparklers for my exit photograph. In retrospect I'm thinking maybe the power setting on my backlighting was a little harsh but, I went with it anyway and this is a photograph that we got.

I think it captures the spirit of the event perfectly – the bride and groom full of excitement heading off on their honeymoon. The sparklers also echoed the upcoming Fourth of July holiday which was only a few days away. All in all, I think it makes a great wrap up photograph for a terrific wedding coverage.