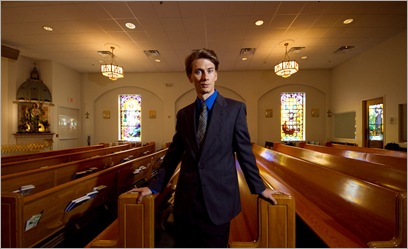 I made this image during my wedding shoot out at Photoshop World last Tuesday. I was trying to demonstrate to the class just how a super wide angle lens could create dramatic impact in a fairly small church. The challenge was to not introduce much distortion of the subject in this image.

I positioned the groom near the center of the frame which minimized that distortion. Since I was shooting into the pews, the wide angle lens really accentuated convergence of the pews into the distance. This image is basically an example of how you position your subject in front of the vantage point. The vanishing point is where the pews eventually intersect each other in the distance.

Lighting was quite simple. I had one of our class members holding my Quantum flash and shooting through my Zumbrella bringing light in from camera right. I determined the correct exposure for the flash on the subject  than underexposed the ambient light. That gave me the result I was looking for.

By the way, in the distance, left of the far left stain glass window, you can even see how we had set up our projector to show the images which were transmitting directly to an iPad 2 attached to the BenQ projector.

It turns out that our wireless shooting experiment was quite a hit among the instructors at Photoshop world -- everybody wanted to know how we were doing it ;~)