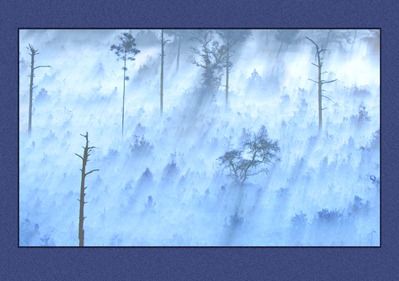 We were up early every morning during our trip to Orlando.  Each morning we got to watch the sunrise.  Most were beautiful but somewhat uneventful but a few were simply spectacular and others were almost surreal like you see in the image above.

It was Sunday morning the the fog had been rolling in over the last two mornings. Sunday morning was different. Yes, we got the fog but as the sun rose into the sky, the fog still hovered on the ground.

While packing I took a quick glace out the window and caught the sight of the sun backlighting the scene and casting the eerie shadows of the barren trees and shrubs across the blanket of fog. What a cool sight.  Once again I grabbed the camera, headed to the balcony and grabbed a few more images.

I had complained a few times about the cooler than usual temperatures we were having in Florida during our trip – it even dropped to 33 degrees on one morning.  While working with this image in Photoshop the final manipulations kept pointing me to the colorized version of the scene.  Instead of being taken in Florida, it looks more like the very chilly surrounds of Minnesota in winter.

I really like the finished result.  The cascading streaks of light and shadow almost give  a brushed stroke appearance to the image. And, since I’m talking about print competition in the following post, I thought I would give it a gallery treatment as part of the finished presentation.