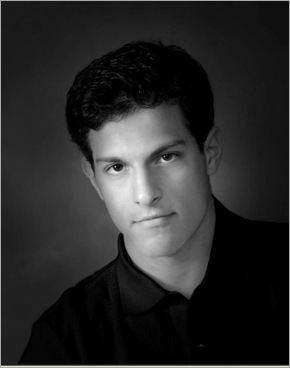 I captured this image several years ago as part of a model shoot for this young man.  He was not yet out of high school but was performing magic shows on weekends at one of our local outdoor malls. And, he was quite good!  I think he looks like a young handsome Harry Houdini.

His mom wanted a portrait that they might use for applications to colleges or maybe even an acting gig or two.  I wanted this portrait to capture not just his handsome chiseled features but also the power of his gaze.  The contrasty lighting and black and white rendering of this image does just that.

Lighting was from camera left (corrected), a Paul Buff White Lightning strobe shot through a Westcott Halo light modifier.  Fill light was supplied by a second strobe bouncing off the ceiling with substantially reduced output in order to not over fill the shadows.  The image was finished up in Photoshop where I added the vignette for final effect.