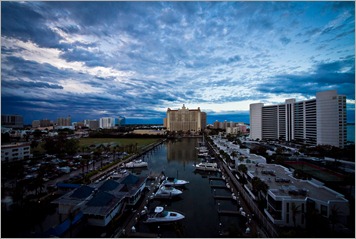 This was one of the last final images I took from our hotel room yesterday before heading over to Orlando, FL for Photoshop World.  It was really storming all night long with the lightning and thunder really putting on a fabulous show of nature’s intensity.

Things began to settle down early in the morning and by 7:00 a.m. the storm began clearing.  I took a few shots earlier which I thought captured the harbor, the Ritz-Carlton in the distance, and the overall scene very well.  After about another 1/2 hour LaDawn noticed that there was even more vibrancy in the sky as the storm continued to clear.

I grabbed the camera and made a few more images right before 8:00 a.m.  I think this one is one of the best.  The textures of the clouds, the luminosity of the sky, and the color just starting to penetrate the cloud cover all made for one very dramatic view from our balcony.

Yes, I did add just a tweak or two of color in Lightroom, but I think it was an appropriate amount to accentuate this wonderful view. Hope you like it.