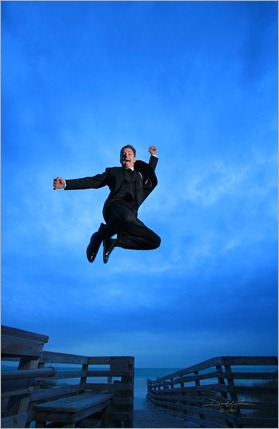 This has always been one of my favorite images that I’ve taken over that last few years.  I made this image while in Florida a few years ago filming some of my early Kelby Training videos.

The weather was not perfect – we were hoping to capture an amazing Floridian sunset at the beach. But Mother Nature was having nothing to do with it.  We were keeping the bride warm in one of the automobiles as it was quite chilly, gray overcast, windy, mostly crummy day.

The groom and I were just hanging out and talking and then I got an idea.  I thought, “This is a cold dreary day, how about I set the camera to Tungsten mode, gel my Quantum with an orange filter to balance the tungsten setting, and shoot away?”

I figured, correctly so, that my exposure should have the groom be in perfect color balance, which he is; and have the sky and clouds in the distance go completely blue since that part of the scene received none of the filtered flash’s illumination.

It worked like a charm – the colors in the scene are not what one would see in a normal setting which is what makes this image so intriguing.  I’ve since played around with the “filtered flash” technique for several other images too and always capture an interesting result.  Oh, it was the groom’s idea to jump off the fence, for a fun and unusual image.

Direct flash, no Zumbrella in this instance, just my Quantum coming in from camera right at full power and just out of camera range. As I said, the image was made in good fun – I still really enjoy the final result.