"The Edge Of Tomorrow" 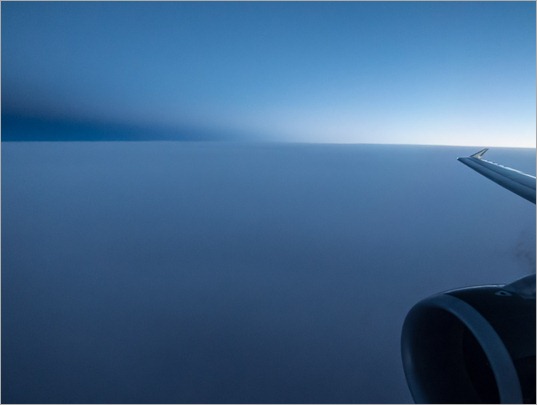 "The Edge Of Tomorrow"
©David A. Ziser

I borrowed today’s title from an Isaac Asimov sci-fi book title but I think it fits this image perfectly. We were up really early – 2:00 a.m. – on Saturday for our flight to Cabo San Lucas, Mexico that by the time we had boarded the plane 4 hours later in Dayton, Ohio it was still dark outside.  No problem, I was sitting in the window seat, my favorite, and the window was really clean on our Frontier Airlines jet.  That meant that it should be a kick to get some really cool shots at 38,000 feet.  That is, whenever the sun came out.

Also considering the fact that the plane was traveling westward into the darkness, sunrise was going to be later for us than if we had stayed in Dayton.  I still just love gazing out a plane window to see how the sky changes with the clouds, weather, and time of day.  Anyway, about two hours into our flight the rotation of the earth overtook the speed of the plane and I could clearly see the edge of night or edge of the new day – which ever you prefer.  I thought the sight on the 38,000 foot horizon was really interesting – the easy lines, smooth tonalities, and almost monochromatic colors.  You can actually see where the darkness meets the light of the new day right in the center of the image.

I took several images but this one was my favorite.  I like the fact that the plane’s wing and engine are included in the composition.  That gives the image a sense of space without the image coming across as a totally abstract composition.  I also like how you can discern the curvature if the earth in the image as well.  Like I said, a very cool view!

The camera I was using may come as a surprise to you.  I had just picked up Canon’s recently introduced PowerShot SX50 HS camera – a little jewel of a camera, But, more on that in a later post. The articulated viewfinder allowed me to easily frame up the shot from my bulkhead seat.  I adjusted the exposure to under-expose the scene slightly in order to better define the “edge of tomorrow” that you see in the image.

Post production was minimal – a slight tweak of the vibrancy slider, reduction of the noise, and slight edge sharpening gave me the finished result.