Things are coming together… slowly but surely around the studio.  In effect, when we returned from our travels, we walked right into the holiday rush. That’s not a bad thing – it just means that we hit the ground running. We should be in pretty good shape by this time next week and we’re keeping all of our clients happy – the most important goal for any business.  Anyway, on with today’s post.

I promised you a peek at some of the photographs I captured during my Spain Workshop. Today I’d like to share with you a couple of those images. As I was preparing for today's post, the number of images I was selecting was getting quite large so I decided to break it down into a smaller selection of images for today. I think there just may be a Technique Tuesday or two in the making here ;~)  So that being said let's get on with the image preview. 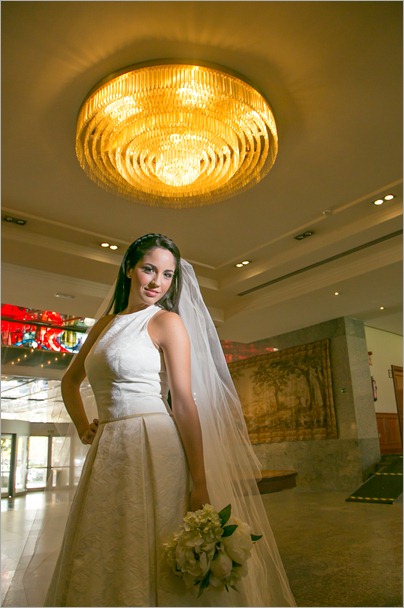 This is just a simple, traditional portrait of our bride taken in the lobby of the same hotel as the Image of the Day post above.  The camera’s vantage point is slightly higher so we see more of the floor in this image. Lighting was from camera right from my  remotely fired Canon 600 TX – RT strobe.  I used the beer koozie (never leave home without one) to control the cone of light illuminating the subject. It really gave us a nice spot light affect on the bride. 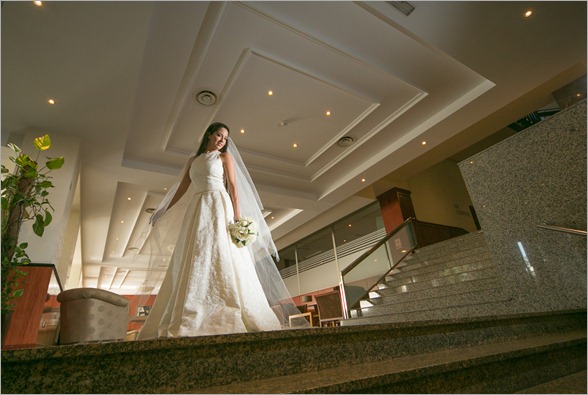 Next we moved to an area of the hotel opposite the registration area. What I loved about this location was the long strong diagonal lines that I saw in the ceiling. To accentuate those lines my camera's position was going be quite low and, as you can see from this photograph, so I positioned the bride a few steps up so that I'm actually below the floor on which the bride is standing.

We brought the light in from camera right to create the loop lighting pattern on her face. I carefully positioned her head within the ceiling’s architectural elements to create this quite dramatic wide-angle portrait of our bride. 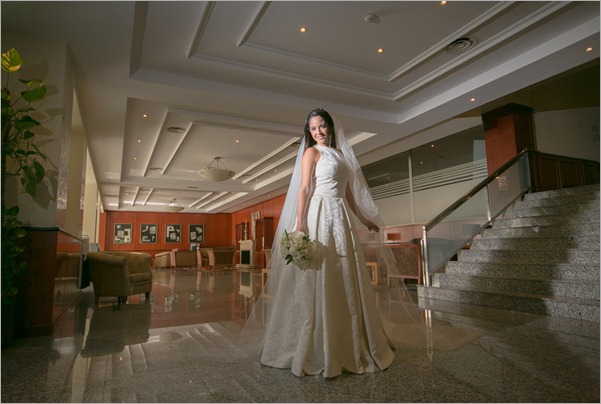 From the previous photograph you can see that the window light was coming in quite heavily from the left. I wasn't sure if I liked the bride looking away from that bright light source so, in this image I chose to reposition the bride to face camera left. This was the same direction as the light was coming through the large span of windows and created a much more believable, natural light on the bride. To be consistent with the strong directional room lighting I also brought my off-camera flash, my Canon 600 EX-RT speed light, in from the left as well.

In this image I also wanted to create a much smaller cone of light so that I wouldn’t have any extraneous light hitting the ceiling to draw viewer’s attention away from my main subject. I shared a different lighting technique by just manually zooming the flash to create that smaller cone of light which created for me the nice natural falloff on the bride.  The zoomed speed-light creates sort of that Hollywood lighting effect that I often bring to my portrait sessions. But, when I look at this image I thought it could be enhanced a bit more with a little backlighting. 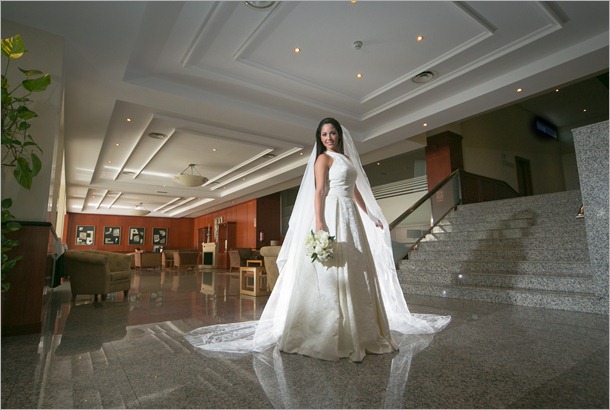 In this image I simply added another Canon 600 TX-RT speed-light placed on the floor behind the bride. I love how I can control the light output of both flash units –  the one coming from camera left and the one behind the bride separately with my on-camera speed-light. Canon’s new speed-lighting system gives me maximum flexibility when setting up these kinds of lighting situations.

The position of the bride's head against the ceiling was most important to me. I didn't want any of the sharp lines or angles hitting her right in the head so I carefully positioned her head in front of a less busy area of the ceiling.

But, do I have any reservations with this image?  I do in this regard. I'm looking at the shadow being cast on the steps camera right. Sure, I can fix it in Photoshop but, a softer light source coming in from camera left may have solved my problem a bit more easily. The problem with using a softer light like shooting through my Zumbrella would've added a complication to the ceiling by illuminating the ceiling as well. This is one of the situations where we have to make a compromise. I think I prefer the lighting on the bride alone without allowing too much light to reflect on the ceiling. It allows the bride to just “pop” out of the scene - which is really what I wanted. 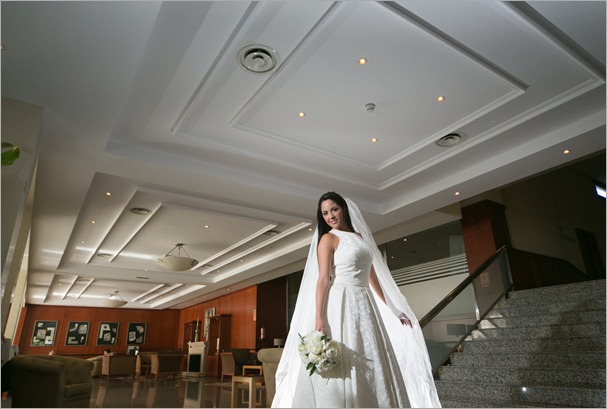 I solved a little bit of my shadow problem, mentioned above, by using a slightly tighter crop in this image. I still think this is a very nice three-quarter length portrait of our beautiful bride. The backlighting “pops” her very effectively from the background and I really like the beautiful dimensional lighting on her face. I'm pretty happy with how these photographs evolved. 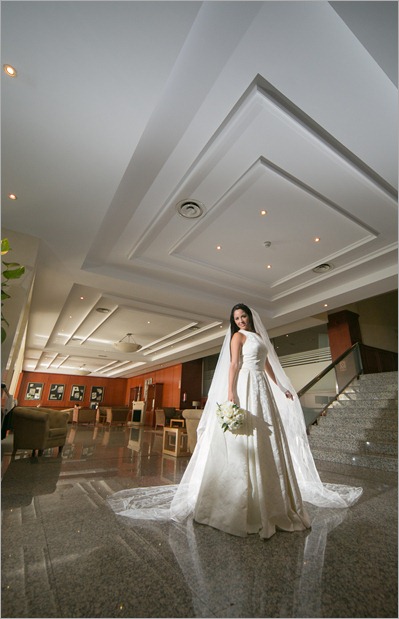 This image is exactly the same lighting set-up as the image we see above. The only difference is I chose a vertical crop. Look how that crop really affects how you perceive the image.  The vertical crop really enhances the strong diagonal lines that we see in the ceiling.  And, I think, adds a stronger element into the composition that renders itself a bit unusual in this dramatic bridal portrait.

In looking back over the previous photographs you may prefer the horizontal image instead but this post is really a visual exercise on how I “see” when composing my images.  That’s particularly true in these last five images.  They are just my variations on a mostly wide angle theme.

When I'm shooting I'm constantly thinking about how I might improve or change the final portrait. I can easily do that with wide angle lenses or by changing the crop from vertical to horizontal. I'm also thinking about how I can best light the subject in the situations and conditions I find myself in on the day of a wedding.  Do I want the subject backlit?  Do I need to keep the light from falling onto the ceiling – or pews – or marble tiled alter…?  How and where will the shadows fall?  These are all important considerations when designing your images. That is – if you want the best result not just for you but your client as well.

Hey gang, that's it for me today. I'm still working hard on trying to get the final details worked out on our PhotoPro Expo for next February. Even though it still three months away we’ve got to get all the marketing pieces ready to go and get the website 100% complete. So, that makes a push time for us around here today. That said, let me wish everyone a great weekend and I'll see you again next week.