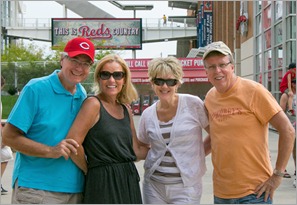 We just wrapped an easy weekend with our friends, Kent and Sarah Smith, from Columbus, Ohio. It seems all four of us were feeling a bit frazzled these last couple weeks so we decided to spend a relaxing weekend together here in Cincinnati, Ohio.  Kent and Sarah headed south after their last portrait session in Columbus and landed on our back deck around 8:30 PM Friday night. It was great to catch up with old friends.

On Saturday, after a slow-moving morning, we headed to Cincinnati and checked into the beautiful Cincinnatian Hotel – one of the best hotels in the city.  We spent a relaxing afternoon enjoying an adult beverage or two, walking the downtown area, saw an entertaining play on the Showboat Majestic, and wrapped with dinner at Morton's Steakhouse. 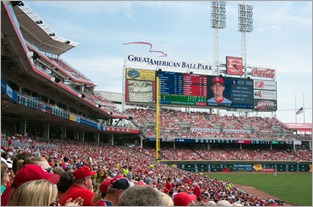 Sunday included another leisurely wake-up call, a relaxing breakfast at the Palace Restaurant, followed by a trip to the ball game to see our first-place Cincinnati Reds play the St. Louis Cardinals. I haven't been to a ball game in a number of years and it was kind of fun to get caught up in all the excitement. The Cincinnati Reds are fielding a good team this year (even though they lost Sunday’s game) and the fan excitement was everywhere. After the game we sadly said goodbye to our friends who headed back to Columbus – all of us still feeling a nice glow of a great weekend together.  LaDawn and I headed back to the Cincinnatian Hotel for one last relaxing night’s stay.

Personally, I think it's a good idea to take that occasional breather from the day-to-day pressures of our studio operations. Whenever we all get together, not only is it good times with lots of laughs, it's also a rich experience sharing ideas, techniques problem solving…. that further help both Kent and I enrich our studio’s growth.

Announcing PhotoPro Expo 2013 - The Best Photography Event In The Midwest!

I know that I've been MIA for the last couple of days with lots of projects I needed to get completed before the weekend. The biggest project on my plate was launching PhotoPro Expo 2013. PhotoPro Expo 2013 will be the largest photographic event in the Midwest happening next February 7, 8, 9, 10, 11, 2013. 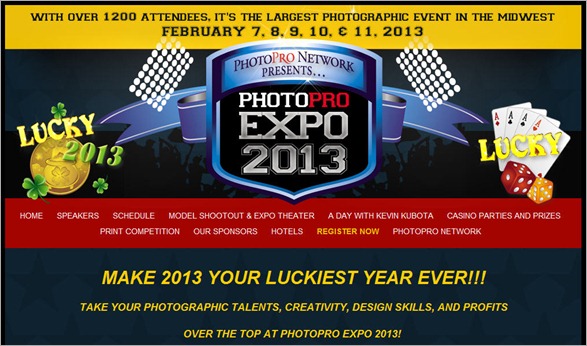 Our talent lineup is unbelievable. Already confirmed to appear are Joe McNally, Julieanne Kost, Rick Sammon, Zach and Jody Gray, Kent and Sarah Smith, Alex Buono, Kevin Kubota, and nearly 20 additional speakers making next year's convention one of the most ambitious educational events available anywhere. PPE13 will also be the largest photo trade show in the Midwest with over 100 booths to visit. Mark your calendars now and plan to attend this exciting event.

The cost for this photographic extravaganza is only $129 until September 30, 2012. After that the price will revert back to its $179 normal price. If you want to take advantage of the biggest and best photographic event in the Midwest please head over to the PhotoPro Expo 2013 website right here where you can get all the details. The site is about 85% complete at this time but I plan to have it finished by the end of the week. Still, don't hesitate about registering for next year's terrific convention. I'll fill you in all the details as the days pass by. If you have any questions, you can call our Executive Director, Randy Fraley at 606-571-1908.  He'll be able to answer any of your questions. 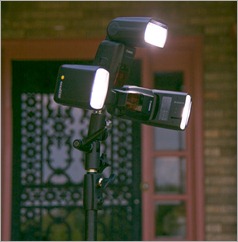 That's right, I'm completely revamping my lighting rig for shooting weddings. As you know, I've been experimenting with Canon’s Speedlite 600EX-RT these last couple weeks and I'm slowly getting a handle on how they work. I used them to photograph a small wedding about 10 days ago and everything went great. This coming weekend I've a huge 12 hour event in which I  plan to give these three little speed light gems a real workout.

Hopefully, over the next few days, I’ll finish testing the high-speed sync characteristics of the Canon speed lights. I plan to have some news later in the week.

Because of the capabilities of the higher ISO camera I'm using  –  the Canon 5D Mark III – I know I'll be able to get by with much less light output than what I would normally need. That should make the 60 watt-seconds of power I get from Canon’s 600 EX – RT speed lights adequate for most of the photography I'll be doing. 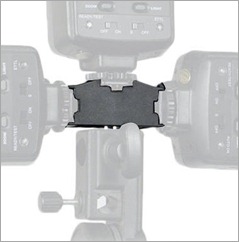 If I need more power I picked up an Interfit Tri Shoe Adapter that will hold up to three of the speed lights. The three Canon speed lights used in conjunction with each other will give me a total of 180 watt-seconds of light. That's actually even more powerful than my Quantum T5d that I've used for many, many years.

My thought is that when I need a powerful off-camera flash, all three of the Canon 600 EX – RT speed lights should fill the bill for me. For most of the reception shooting I'm confident that I can get by with one flash on camera and two other flashes set up to illuminate the dance floor as I described at DigitalProTalk in a recent post [link].

The challenge for me in using these new strobes is the learning curve. Not only am I looking at nearly a dozen buttons on the back of the new strobe, there are now four separate menus to also scroll through to take advantage of the full functionality of the Canon speed lights. But, it's like anything else – once you get the hang of it, the operation is really quite efficient. 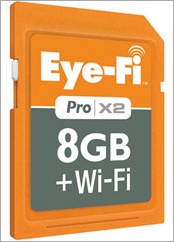 One thing I love about my Canon 5D Mark III camera is the fact that it accepts a SDHC card in the second card slot of the camera. I've been using the 32 gig SanDisk card as my backup card for all of my photography sessions. I picked up one of the Eye-Fi 8 gig SDHC Pro X2 wireless cards last year and was hoping to be able to make it work in my Canon 7D camera. That never really came to fruition so the card is been languishing in a drawer in my office. I've talked with some other photographers that have reported decent success in making the Eye-Fi 8 gig SDHC Pro X2 work in their Canon 5D Mark III  so I’ve decided to also give it a try.

I purchased my iPad 3 from Verizon so I would have the capability of having the iPad 3 act as a hotspot. Having a hotspot functionality built into the iPad 3, I felt would make it easy for the Eye-Fi card to pair with the iPad and easily transmit the images into  the ShutterSnitch application I have installed. 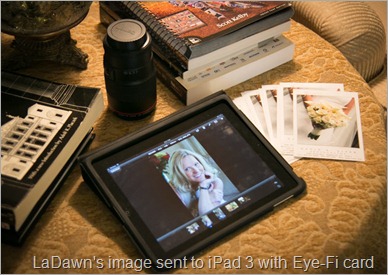 As I said, the pairing of the Eye-Fi card to the iPad 3 has been a bit problematic. The problem occurs in trying to get the hotspot to go “live”. My workaround, so far, has been to use my iPhone first to see the iPad hotspot and then connect to it. This takes a few tries – I think the problem is the wireless we have in the studio jammed the iPad 3 hotspot.  The connection is not immediate, it has a few second delay, as I would like it to be. But, after fiddling with it for a while, and after several tries, I finally get my connection with my iPhone.

Once a hotspot is activated and working, it's quite easy then to get the Eye-Fi card to pair with a hotspot and transmit the images directly to the iPad 3. I plan to be working with this hardware/software combination at Photoshop World next week during my Wedding Pre-Con. I'll provide additional details as they become available on how to make this potentially very useful scenario work for you as well.

Hey gang, that's it for me today. I want to get back to work on the PhotoPro Expo 2013 website so that you have all the details when you check it out. Everybody have a great rest of the day and I'll see you soon.