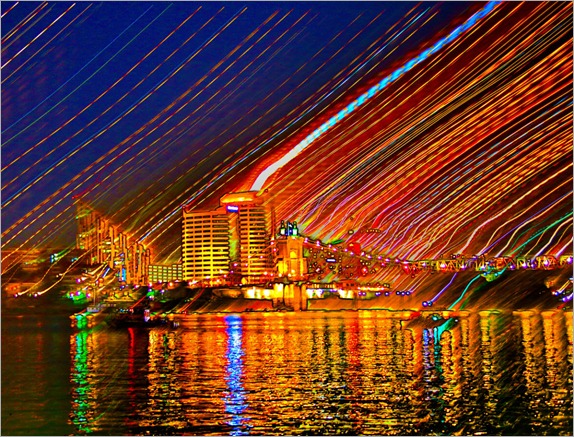 "City of Lights"
©David A. Ziser

Okay, gang don't hate me for this image post today. Over the weekend we visited Showboat Majestic, a floating theater on the Ohio River.  At the intermission break we were walking the decks and I thought, “What a great place to capture some HDR photographs of the night lights on the Ohio River.”  This image is a view from the Cincinnati side looking towards the Kentucky skyline.

Barges and boats were going by causing a slight rock and roll action on our deck.  I decided to make the exposure anyway. I guess we were hit by a fairly large wave during this exposure, hence the long light streaks across the image.

When the image popped on the back of my camera, I still thought the image was a quite interesting exposure. Although I had several other images that look just fine, I kept coming back to this very abstract looking image.

I brought the image into Photoshop CS 6 and decided to have some fun with it. In addition to “juicing” the saturation and vibrance of the image, I also applied the Smart Sharpen filter to this image as well. I found I got a very interesting result when I used the “ remove motion blur” option in the Smart Sharpen work panel – it added sort of a bevel/embossed look to the image.  Some careful burning in of the shadow areas to darken them  added an even more dramatic feel to my finished result. You're right, maybe I had too much time on my hands today but I still like this result.