Well, the best laid plans went astray for today.  I was planning to be on an all day portfolio building photo shoot, but the rain over the last several days has put a damper, (no pun intended) on today's session.

You know, one of the best ways to "sharpen the saw" as they say, is to practice.  How many of us take the time to do just that? Unfortunately, not many - heck, me included lots of times.  That's why I was looking forward to today's shoot.

The good news is that I'm doing a shoot for are state KPPA Summer  School on Monday - it's only for a few hours but it will still be fun because it's in a location I've never photographed in before.  I'll share a few images with you next week after we return.

As usual I’ve gotten a little off tract, but why don't you think about it.  Why not get a few like minded photos together, hire a few models from Model Mayhem or Craig's List and just go out and PRACTICE.  I promise you, you'll enjoy it ;~)

Have you ever really practiced how to focus?  I know, right off the bat, you're thinking I'm crazy for even bringing it up.  You're thinking, "David, the cameras all have built in focusing systems.  Why do I need to KNOW how to focus?  The camera does it for me." 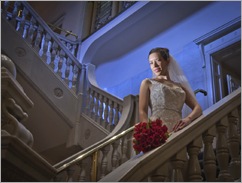 Well, you are absolutely right to say the cameras have built in focus, but I can tell you from experience that lots of folks don't know how to use the camera's built in focus functions.  I was teaching one of my Master Classes a few years ago.  By the way, our next Master Class Workshop [link] is scheduled for October 18-22, 2010.  Anyway, we were photographing a bride on the stairs at one of my favorite wedding venues, the Phoenix Club, in downtown Cincinnati.

I was showing the class how I was framing up the bride in the composition and thought I was getting some exciting images.  One of the class members stepped in to try to duplicate the shot and was surprised by her really blurry result.   She showed me the image on her LCD screen and it was definitely blurry.

I did some further checking of her camera settings and discovered that she really didn't understand how the focusing features worked on her camera.

She had ALL the focus spots activated so when she set up my shot in her viewfinder with the bride in Quadrant #3, guess what? The camera didn't know it was supposed to focus on the bride.  With ALL the focus spots activated, it simply focused on the object closest to the camera, which, as you can see in the photograph, was the marble staircase railing. 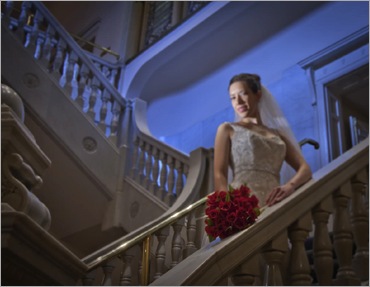 In her shot, the railing in the viewfinder was in sharp focus, but because on the large aperture we were shooting with, the bride went quickly out of focus because of her greater distance from the focus plane.

Why do some folks have this problem?  You know, back in the days of film and manually focused cameras, photographers all did the same thing - focus on the subject and then reframe the image for the best composition.  It was just the natural thing to do. 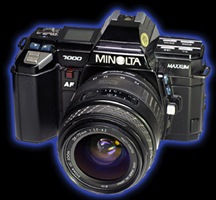 With the advent of auto focus cameras….. Who can remember brand and model?  It was the Minolta Maxim 7000 introduced in January 1985!  I had one of the first cameras available.  It was way cool how it worked - no more manual focusing I thought till I discovered I was having focusing problems with an AUTOFOCUS camera!

I quickly learned that if I focused on the subject, then held the shutter button down half way to hold the focus and then reframed the shot, my problems went away.

Today we have cameras with a gazillion focusing points, we can even dial in whichever one we want and just shoot away.  But what is the best and quickest way to shoot?  Turns out that the technique I used in the old film manual focus days works just fine in this brand new digital millennium of ours.

So this is a long story with a short conclusion.  How do I focus when I’m shooting? 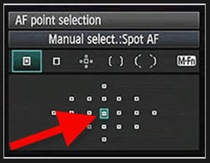 I need to point out that this is NOT how I would set up my camera when, say shooting fast moving sports where the center of interest is quickly changing.  But for me, as a "people photographer", this is the only way to shoot if you want to be assured of rock solid focused images.

DAZNOTE:  You can find a additional information on the Canon 7D at Imaging-Resource.com right here.  They have a nice write up on focusing as part of their hands on user report.

If you've been having focusing issues, you just may want to give my technique a try.  May all your pixels be sharp from this point forward ;~)

Hey gang, that's it for me today.  We've a BIG project we're working on this week and I need to get back to work if we are going to pull it off.  More later.....

Everybody have a great day and I'll see you bright and early tomorrow for another very profitable Business Day Thursday.

See ya' then, -David