"Beauty Among The Ruins" 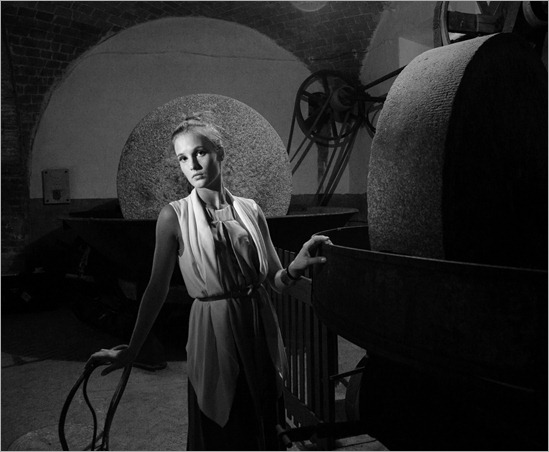 "Beauty Among The Ruins"
©David A. Ziser

These surrounds aren’t really ruins but the olive press room at the castle. And, I have to say, about the darkest space I’ve ever photographed – just check out the camera specs below.  Nevertheless, I thought this space would be perfect for the portrait of Orchi that I had in mind.

Look at all the repeat circular elements we have in this scene – the two pressing stones, the arch in the architecture, the pulleys, and even the curve of the chair back. I thought these repeating elements did a great job in framing our subject.  With her positioned near “nodal point #2” we strike a nice visual balance with our subject and all the other visual elements in the scene.

I further wanted to draw viewer attention to our subject with the dramatic use of lighting I chose for this photograph.  Since the light was so low in this space I used a small 5 LED flashlight.  It was the small cone of light from the flashlight that gives this image a “Hollywood/George Hurrell” look to it which I think is quite striking in the context of the overall composition.

The last adjustment to the image was to make it a straight black and white image.  As a B&W image, all distractions of color are dismissed from the scene leaving us a simple, classic, dramatic portrait of this beautiful young lady in this very eclectic location.