A Study In Colors, Composition, Textures, and Detail – Istanbul Style

We are somewhere in the middle the Mediterranean right now – I'm not quite sure where – but we’re due to arrive in Naples, Italy tomorrow morning around 6 AM. Since we’re at sea all day today – no cell phone service, weak and slow internet connectivity, and no Skype, it's given me a chance to catch you up on a few of the amazing cruise stops we've had along the way.

One of the most fascinating stops we've had so far has been Istanbul, Turkey. We arrived late in the evening and it was really amazing to see the city lights up at night.  The first sight that caught my eye was the Bosphorus Bridge with it’s constantly dancing colors offering a quite spectacular welcome to Istanbul. 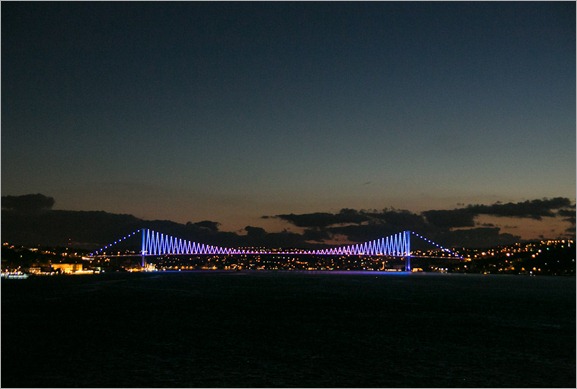 As we floated down the seaway, you could see the famous Blue Mosque and the Hagia Sophia Galleries on the hill tops just across the water – what a sight! 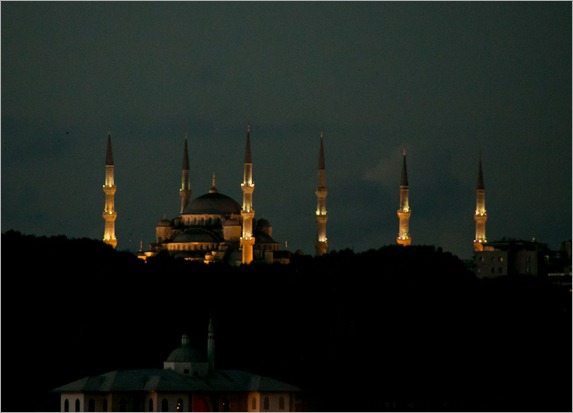 An Unbelievable Study In Colors, Composition, Textures, and Detail!

Today's post will center around composition, colors, textures, and detail. One of the most beautiful places on earth to explore these four photographic elements is in Istanbul, Turkey. In Turkey there seems to be a mosque on about every street corner. Although the country is 99% Muslim, Istanbul is more of the secular variety rather than the much more fundamental variety you may find in the other countries of the Mideast  like Iran or Iraq .

In any event, the historic locations which we visited a few days ago certainly lend themselves to today's discussion. The reason for this is simple. You'll find no statues in any of the mosques in the Middle East. The Muslim faith shows no representation of their God in any form or any statues of any kind. Instead their mosques are wonderfully decorated buildings in which to pray and pay homage to Allah. It's the interior design of these mosques that is so fascinating to view. Let me give you an example below of the Blue Mosque. 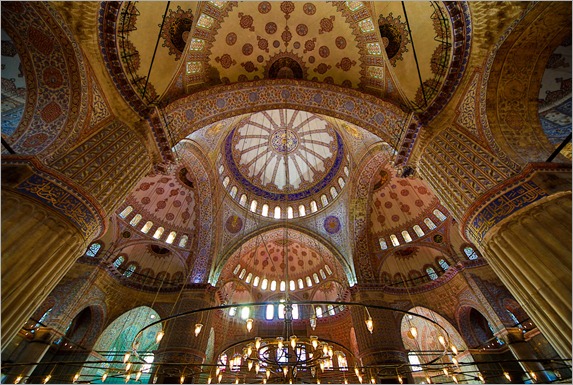 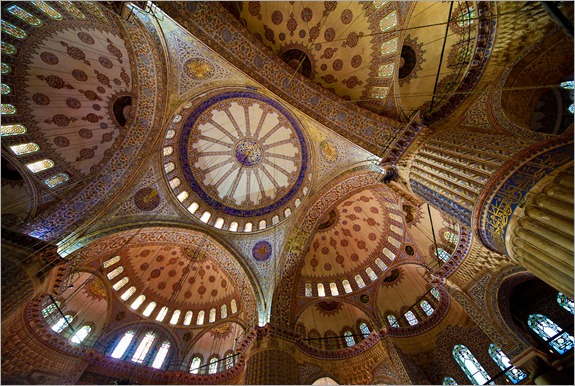 The minute you slip off your shoes and enter this holy place your eyes are bedazzled with the unbelievable architecture that presents itself before you. These four images show you the ceiling detail in Istanbul's most famous mosque. I found that I got the most fun out of photographing these wondrous spaces in HDR mode. 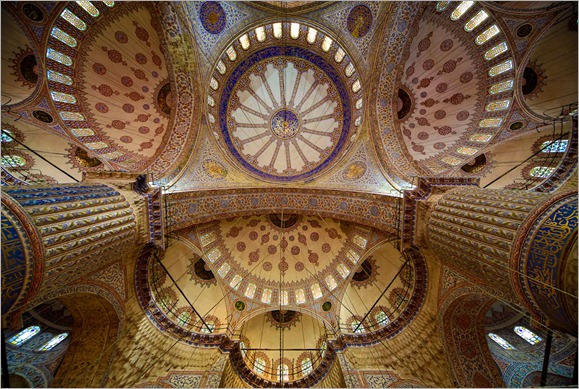 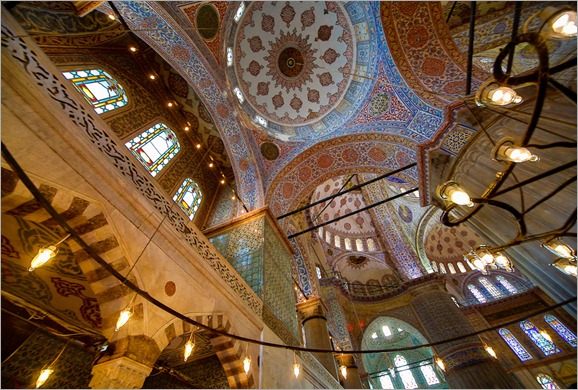 I also spent a few moments in Lightroom tweaking the colors and textures to get them exactly the way I wanted. Like I said, an amazing sight to behold!

Next Up – Haghia Sophia Galleries

Next it was off to Haghia Sophia, just about a block away. The Haghia Sophia was originally built as a Orthodox church but after the influx of the Ottomans it was converted to a mosque. A few years ago it was converted once again to one of most important museums in the city of Istanbul, Turkey.  Notice the architecture. 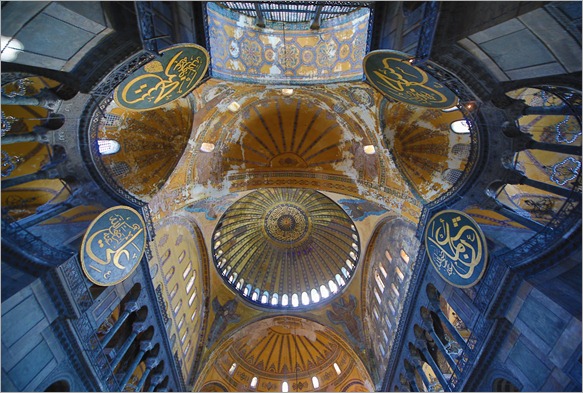 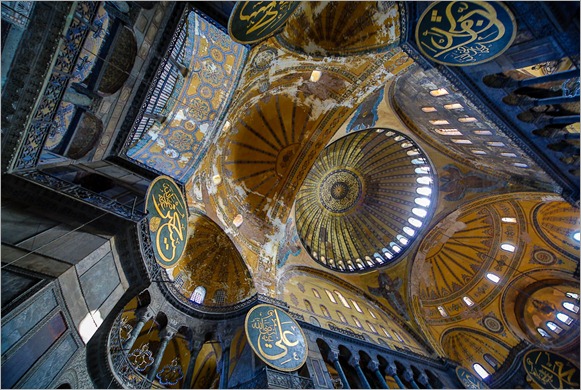 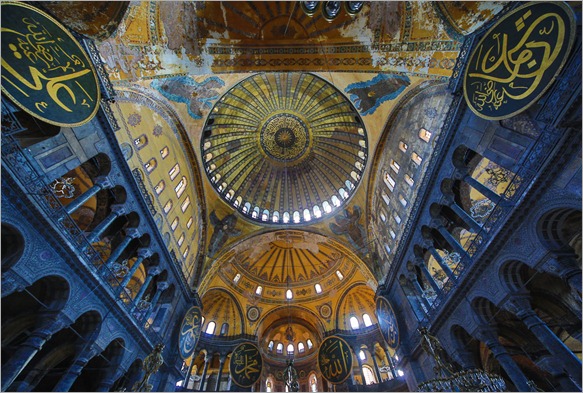 Check out the images in this section. I tried to capture all aspects of the beauty of this wondrous location. What is really interesting is the fact that as a mosque there are several chandeliers suspended from the high ceiling to just over the worshipers heads. Here are three images that I've included in which I used the chandeliers to add the additional arabesque lines in my overall composition.  I think the last one is my favorite. 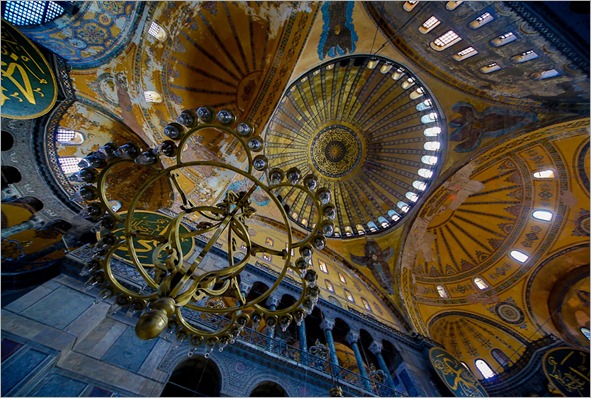 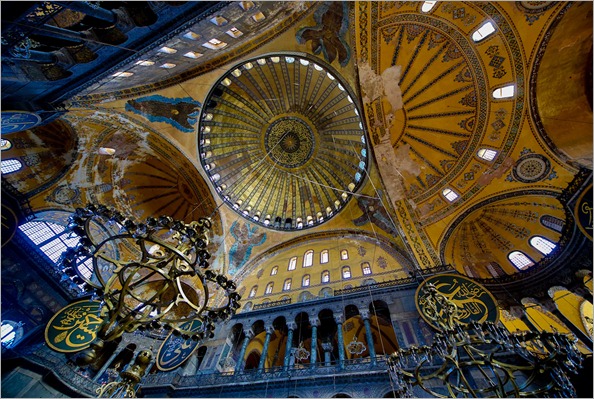 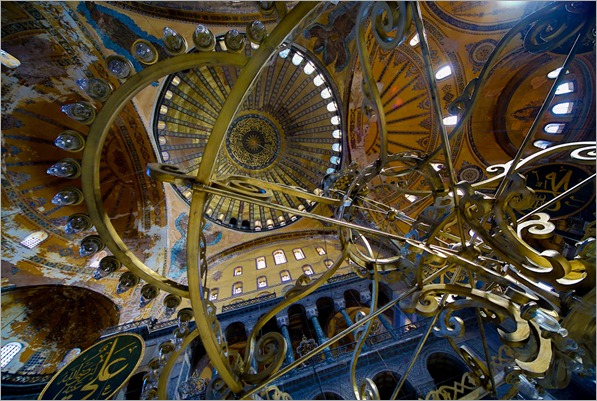 I hope that as you look at these images you too will be blown away by the magic of the architecture and art presented. I have to say, that when you're standing in this holy place up close and personal, it is one fantastic artistic experience.

Even outdoors at the end of the Hippodrome, you could find same type of artistry and beauty as the following photograph shows. 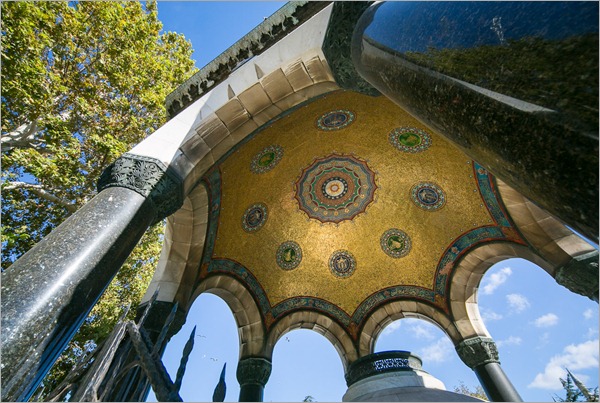 The next day it was off to Topkapi Palace with construction beginning in 1459.  The cool thing about the Topkapi Palace is that all of the original architecture is still pretty much preserved. In addition to seeing the architecture which is amazing itself, it was also very interesting to see the treasures of the palace. These treasures included handfuls of emeralds, hundreds of carats of diamonds, several hundred pounds of gold, and even the staff of Moses – unfortunately…sorry, no photos please. To be honest with you, it was hard to believe your eyes with what you are looking at. It was a fantastic experience.

But for me though it's always about looking up. Because, when looking up at the tiled ceilings, the wonders of the Muslim world really come alive with the fantastic design of their architecture and mosaics. That was true of the palace as well. Check out a few of the images I've included in this section. 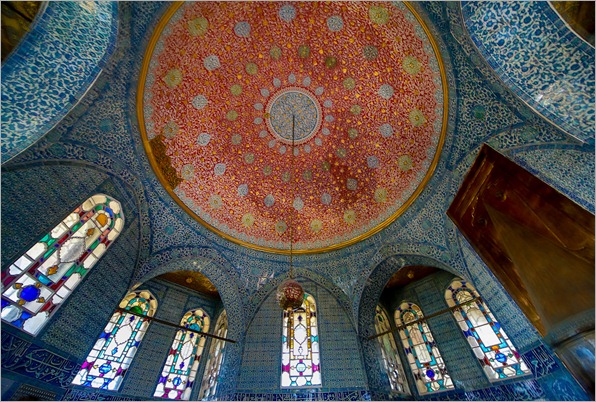 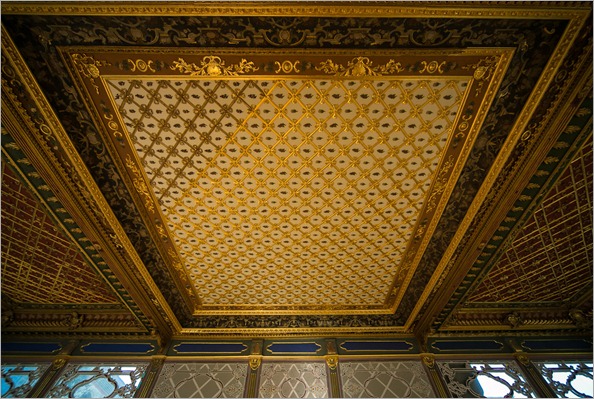 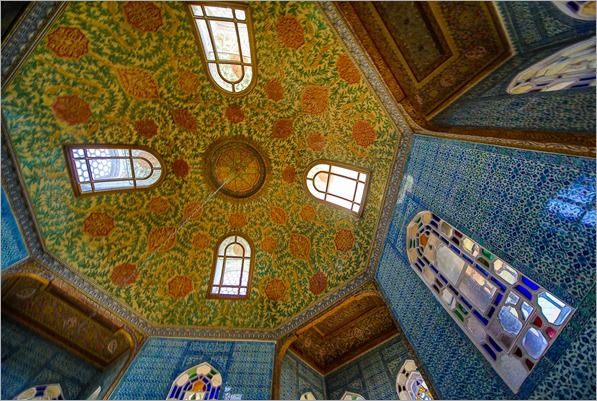 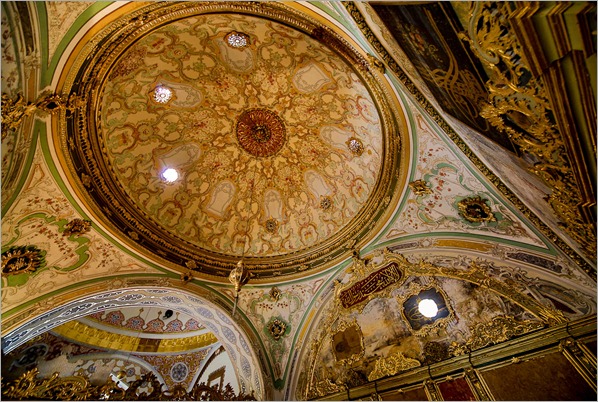 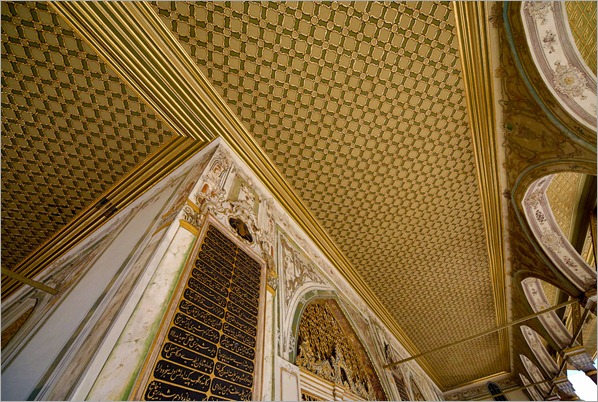 I sure hope today’s images give you a greater appreciation for some of the non-western “hemispherian” art that one can find around the world - what an amazing experience especially when you are standing within the four walls of that wonderful art!

On To Our Next Ports Of Call

The next day we continued our journey's throughout the Mediterranean. Still on our agenda were the ancient ruins of Ephesus and Athens, and the beautiful Greek island of Mykonos. One thing that continue to strike both LaDawn and I as we sailed through the Sea of Marmara and the Bosphorus around Istanbul was the amount of boat traffic that we saw everywhere. The boat traffic included tourist fairies, cargo ships, cruise ships – large and small, and recreational sailing boats – all traversing the Istanbul waters harmoniously and poetically throughout the day. 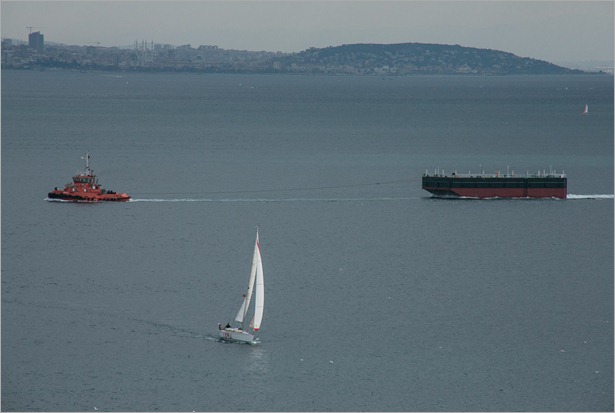 As we pulled away, even though clouds were moving in and most of the city was shadowed, it was especially cool when the clouds opened up and the sun rays spotlighted various parts of the city. Look at the image below. 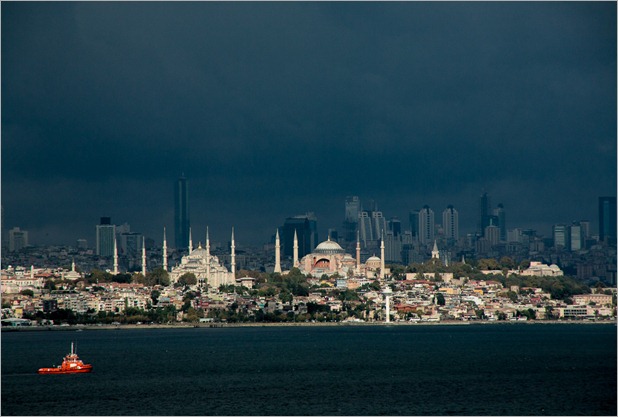 This image makes my point spectacularly as a clouds opened and highlighted the two most famous mosques in Istanbul  - the Blue Mosque and Haghia Sophia. We continued to sail the rest of the day westward into the sunset towards Athens, Greece. 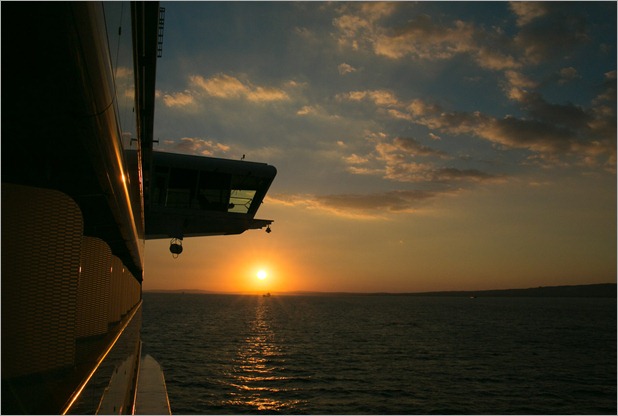 What an amazing voyage this trip is been so far!

Hey gang, that's it for me today. Since we’ll be in Naples all day tomorrow and then leave the ship first thing on Friday morning I'll do my best to get another post up over the weekend before we head out to Barcelona, Spain. Have a great rest of the week and I hope to see you soon.