And You Were Worried Before ! 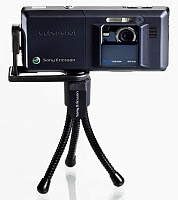 80% of Americans will own digital phones by 2008. 903 million camera phones will be shipped by 2010. Now it gets really interesting. Gone are the days when mobile phone cameras had poor VGA quality of less than 1 megapixel. Today's camera phones average 2 megapixels, while the top-notch models from Nokia and Sony Ericsson now offer 5 megapixels and also come with an array of camera-specific features such as auto-focus, red-eye reduction, and xenon flashes.
So becoming a photographer is now even less of a big deal.

And the megapixel trend will rise further as cameras with 8 megapixels will be out soon. NEC plans to launch a camera phone chip in October and hopes to change things drastically. Top end camera phones will be equipped with 8-megapixel resolution in 2008, with mid-range phones ramping up to 5 megapixels and low-end phones at with 3.2 megapixels. I’m really not trying to put up a “big scare” but too many photogs out there are complaining about the downturn in business, and in many parts of the country, it’s true. That’s why it behooves us to constantly re-invent our products and ourselves so we stand out from the crowd.
Posted by David Ziser at 9:36 AM