I thought I’d sneak in a quick post today about our unfortunately short visit to the Rock of Gibraltar. After a weeklong stay in Malaga we had to overnight one night on our way to Villamoura, Portugal. Gibraltar seemed to be the perfect mid-point stop. We've never been to that part of the world and I never in my life expected it to be visiting Gibraltar but now –here we were. It turns out that it was one of the highlights of our travels. 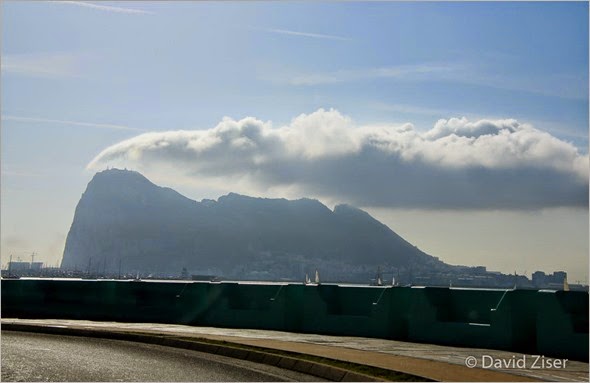 Needless to say the approach to the city is quite impressive when you first see the shadow of the rocket Gibraltar, one of the pillars of Hercules, standing against the misty sky-line. As you get closer the rock grows even larger until at last it presents it's impressive view.

We arrived at our AirB&B around 2:30 p.m. and quickly got settled in. We were on the 12th floor of the apartment building and the views across the city rooftops were impressive and quite telling of this smallish city.

We were only a five minute walk to the Grand Casemates Gates, the main tourist area servicing the Rock of Gibraltar and surrounding areas. As usual, in these heavily tourist sites – the crowds weren’t very bad at all this time of year – we were approached by a taxi driver that wanted to give us "the best tour of our life of the rock.

He came on with a great personality, a great sense of humor, and a promise of a fantastic two hour tour – we were hooked and we're on our way about 10 minutes later. There were many vantage points on the way up to the top of the rock and each one presented a great view of the surrounds. 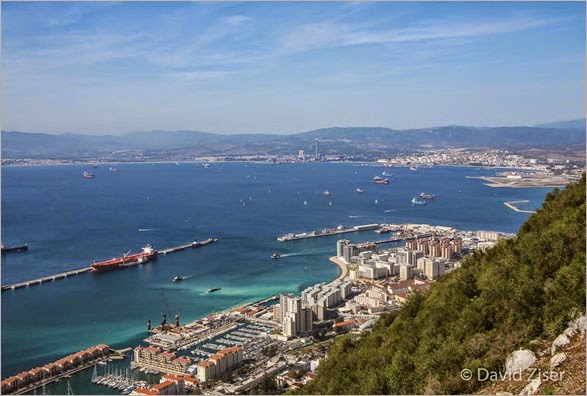 Gibraltar is one of the key shipping ports in the world. You could easily tell that from all the ships coming and going everywhere in the straights. The most unusual aspect of the Rock of Gibraltar are all the monkeys at the top. They were everywhere, including all over the top of the jeep once we stopped and got out. The rule is don't feed them and you'll be just fine. 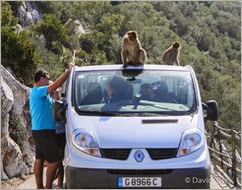 We oblige the rules and we had a great visit at the Top of the Rock. 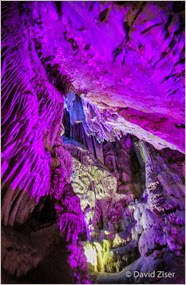 There were many places to see during our short tour including St. Michael's Cave, a fabulous cave formation within the Rock.  It is well lit and is set up for concerts and events within the stone surrounds – quite impressive! The Great Siege Tunnels of Gibraltar shown on the left  were hewn out of the solid rock and were pretty amazing to tour as well.  We only had a short stop there and wished we had more time to explore and photograph this fascinating and historic part of Gibraltar.

Of particular interest is the airport runway in Gibraltar. Look at the image below. You can see that the landing strip crosses the main road into the city. Yes, the gates can come down and block traffic on the highway when planes are making their approach. A very interesting solution to this very small city. 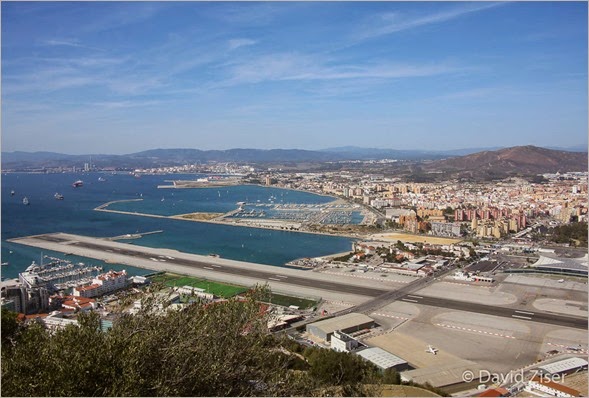 We wrapped a very quick tour in this British territory, enjoyed an English brew at one of the local pubs, and had a fabulous dinner at Gatsby's Restaurant. Our day wrapped with a beautiful sunset over the city rooftops that we had just seen a few hours earlier.

Hey gang, that's it for me today. I just wanted to get a quick post up about our stop at Gibraltar because it was definitely a wonderful place to visit. I only wish we had another day or two there. Check in again and I’ll give you the latest update from our visit to Villamoura, Portugal. Home to marinas and golf courses. This is a popular vacation spot for the rich as well as many Europeans. More later.