”A View From The Top” 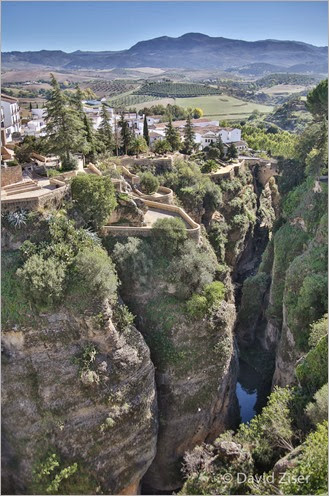 ”A View From The Top”
©David A. Ziser

Here is another image I captured during our stay in the Andalusia region of Spain.  The locales in this part of Spain are simply spectacular.  This image was made from the town of Ronda which was built on the top of the cliffs in the area.  This setting gave the residents a perfect vantage point in order to keep their eyes on any would be intruders.

Shooting mid-day under very sunny lighting conditions can be quite challenging.  In the past I have tried to remedy the situation by shooting my Canon 5D Mark III in HDR mode.  I’ve never been thrilled with the result.  This scene photographed the same way gave me a resulting photograph that I think makes for a pretty nice mountain landscape image.

First of all I like the composition with the foreground dropping deep into the valley below and the plateau receding into the mountains in the distance.  The architecture and the medieval design of the town sure didn't hurt. Shooting HDR did a good job preserving the very wide range of tones throughout the image. It’s a magnificent setting in a very historical part of this wonderful country of Spain which we enjoyed so much.

DAZNOTE: You may question my use of F-Stop for this image. I don’t remember why the camera was set to F 4.0 either.  I’m presuming I was shooting in Aperture Priority mode moments before and simply forgot to make the change before I made this image.  The 28mm focal length still carries the depth of field just fine though. David

LDNOTE: This was the exact location I received word from home and discovered I became a Great Aunt for the third time. BIG Congratulations to Chelsea and Joe!