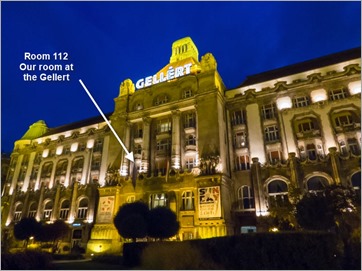 We landed safe and sound in Budapest, Hungary Monday just over a week ago. The flight was about 11 hours with an additional 3 hour layover in Paris – not a bad place to have a layover – although we spent the entire time in the airport ;~)  After gathering the bags we hopped a taxi and made the 30 minute trip to beautiful downtown Budapest and checked into the Gellert Hotel – one of the “Grand Dame” hotels in the city.

Just as we pulled up to the hotel we were spotted by many of the class members, my buddies Jeff Medford and Roland Pallagi, and fellow instructor Clay Blackmore.  Clay and I conducted the same class in Tuscany, Italy just a year ago.

It was great to catch up with old friends and we were all fired up for the Master Class to begin on Tuesday.  I said it to myself a million times, “This is one of the most beautiful cities I have ever visited in all of my worldly travels!” 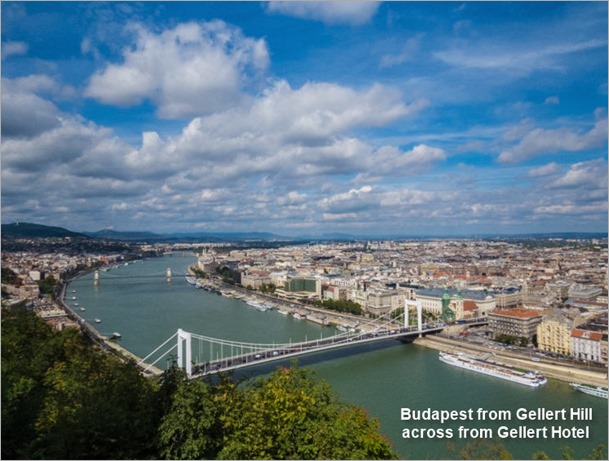 After checking in and a short rest, LaDawn and I set out to explore the close by Gellert neighborhoods on the Buda side.  The city was bustling with color, sounds, smells, and energy.  It was a good first day.

The next day, Tuesday, after a quick meeting with the class to layout the plan for the week, we were all off on our own to explore Budapest’s wonderful architecture, beauty, and history.  LaDawn and I found ourselves taking a tour of Dohány Street Synagogue, the second largest synagogue in Europe [link].  We took the fascinating tour and took in all aspects of this historic structure.

DAZNOTE: The Hungarian Jews were persecuted severely during the Second World War with more that 550,000 Jews being shipped off to concentration camps – the third highest of all European countries –with many, many never surviving and killed those awful times [link].  It was then only ten years later that the famous 1956 uprising against Russia began eventually gaining for Hungary their true independence. It was finally in 1990 that Hungary became the democracy it is today.

I share these facts with you because that is what I find so fascinating about our travels.  We are walking through the recent history [link] of the beautiful country which has been through so much turmoil in recent years.  Yet, here we are today giving a Master Class in this beautiful city.

After a full day of taking in as much of the city as we could it was back to the hotel for the first shoot of the week’s Master Class.  Jeff Medford, my good friend and coordinator of the Master Class had arranged for Clay and I and the entire class to have access to the famous Gellert Spas, one of the most famous and most beautiful in all of Europe.

Roland, a native of Budapest and also my assistant at last year;’s Tuscany Master class had arranged for our beautiful models – and beautiful they were, they were gorgeous!  The class broke into two groups and we proceed to the spa.  WOW!  That’s all I could say.  What a fabulous place to photograph!  Let me share with you a few of my favorite images from the evening’s session.

Photo 1: The goal was to achieve a nice balance of the flash exposure with the ambient light to bring out the beauty of the spa setting.  I also placed Anna in front of the vanishing point as part of the compositional elements I desired in this image which subconsciously draws the viewers attention directly to Anna’s beautiful face.  Camera specs: Canon 5D Mark III fitted with my Sigma 12 – 24 mm lens at 24mm, 1/20 second at F5.6, ISO 2000.  Lighting camera right, Canon 600 EX-RT speed-lite through my Zumbrella. 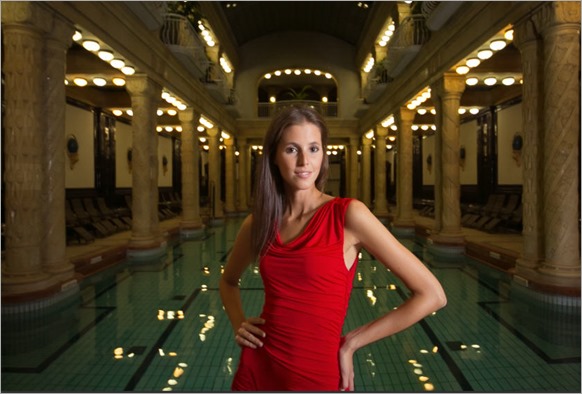 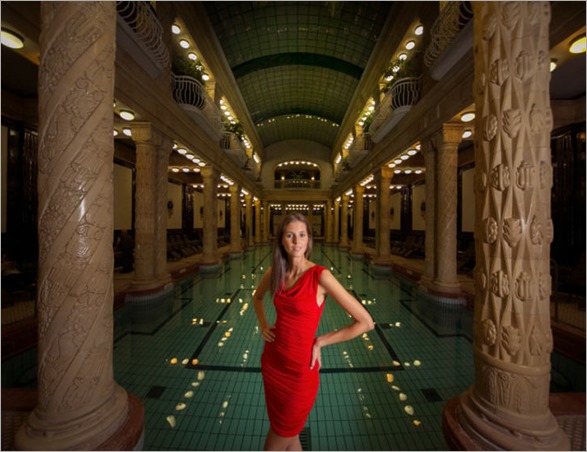 Photo 3: The lighting and the perspective really make for a dramatic image.  This is an example of how we used my Z-Ray Flashlight to pin-point the light with little spill onto the marble columns and also used a second flash for  back lighting to add dimension to Greta’s hair. Camera specs: Canon 5D Mark III fitted with my Tamron 28-300mm VC lens at 28mm, 1/20 second at F5.6, ISO 2000.  Lighting camera right from my Z-Ray Flashlight 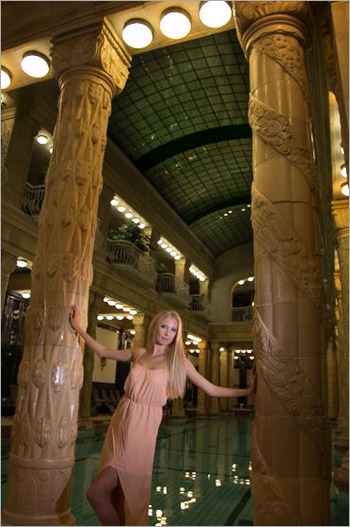 Photo 4: The super wide angle lens really draws the viewer's eyes directly to our subject.  Camera specs: Canon 5D Mark III fitted with my Canon 8-15 Fisheye at 15mm, 1/50 second at F5.6, ISO 3200.  Lighting camera left from my Z-Ray Flashlight,  and balancing for the ambient light of the spacious lobby area of the spa.. 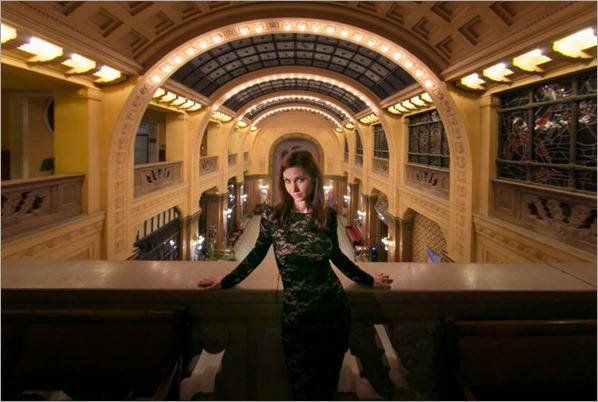 Photo 5: I really like the accentuated converging lines in this image.  This was a small lesson on back-lighting against the  really reflective marble surfaces. An additional Canon 600 EX-RT was placed not of the ground, as I usually would do, but on a chair hidden from view by the leg of Anna on the left. Camera specs: Canon 5D Mark III fitted with my Sigma 12 – 24 mm lens at 12mm, 1/40 second at F5.6, ISO 3200.  Lighting camera right, Canon 600 EX-RT speed-lite through my Zumbrella. 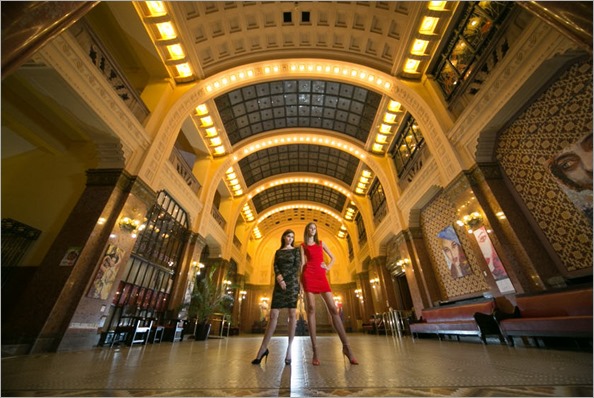 Photo 6: Look how the colors carry from the painting to the color of the Anna’s dress in this image.  Another example of using compositional elements within an image to create dramatics, not only with color but the sweeping C-curve of the red hair in the painting contrasting with the S-curve of the model. Camera specs: Canon 5D Mark III fitted with my Tamron 28-300mm VC lens at 77mm, 1/40 second at F5.6, ISO 3200.  Lighting camera right, from my Z-Ray flashlight. 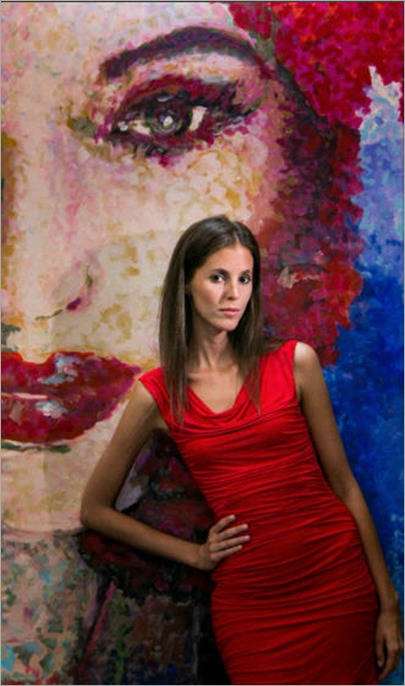 Photo 7: This is an image of one of the student attendees, Angelea. I love the repeat of the eyes in this image. Angelea’s exotic look with the the hidden expression of the female in the painting. Camera specs: Canon 5D Mark III fitted with my Tamron 28-300mm VC lens at 168mm, 1/40 second at F5.6, ISO 3200.  Lighting camera right, bouncing off the highly reflective wooden bench Angelia was standing upon creating the loop lighting pattern from my Canon 600 EX-RT speed-lite. 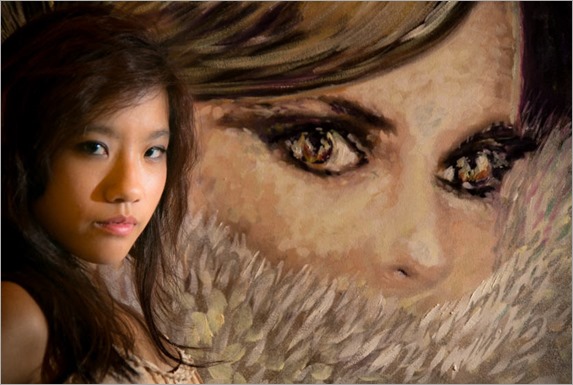 A BIG thanks to Angelea, one of our Master Class attendees, for standing in as my model for this image.

Not a bad start for the first day of shooting, do you think?  I’ve got lots more images to share with you over the next several days from the Master Class so please come back later this week as I continue to share the images and experiences of The Budapest Master Class. It has been a TERRIFIC week!

Hey gang, that’s it for me today. The class wrapped on Sunday and LaDawn and I are spending a few more days in the city before moving on to our next location.  Have a great rest of the day and I’ll see you soon!