Yesterday we headed out to explore more of the countryside. We had heard about the quaint little town of Ptuj – pronounced pa-too-ee – I know, our letters in the US don’t sound the same in other parts of the world but with a little practice you eventually figure it out ;~)  Anyway, Ptuj is the oldest town in Slovenia and is located on the Drava River. It also is home to one of the oldest wine cellar in Slovenia dating back to 1239.  You guessed it – we had to take the 90 minute tour. 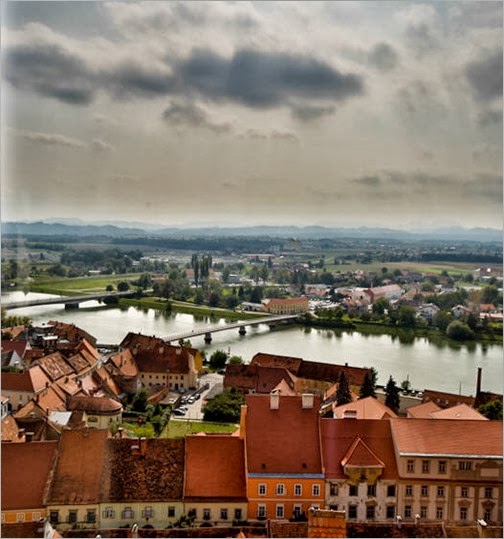 We also toured the Ptuj Castle as well which turned out to be quite a nice surprise with so much to see from the castle including rich historical details,  to 15th and 16th century paintings, weapons,  armor, musical instruments, and cultural costumes.  It was a very nice day in Ptuj. 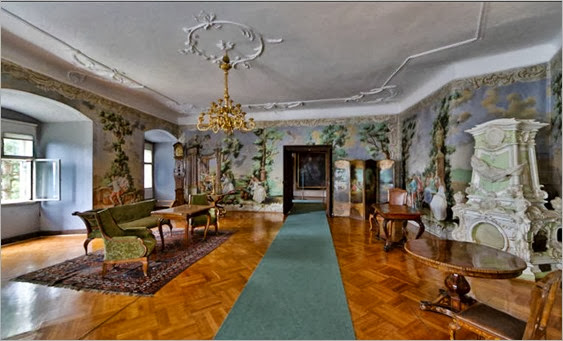 We then discovered we were less that an hour from Zagreb, Croatia.  We decided to add a third country to our itinerary for the day.  After a few passport checks we were on our way.  Zagreb was a busy, bustling city of nearly one million people.  We also hit it during rush hour and were stuck in traffic for a while. 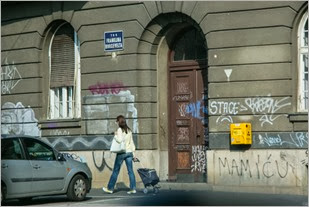 The first thing that hit LaDawn and I was the amount of graffiti painted everywhere – a real turn off for the both of us.  But in all fairness we need to give the city a second look since it is always on the recommended list of most travel guides.

We finally got back to our cottage about 6:15, just in time to enjoy the evening sunset and a glass of fine Slovenian wine.  It was a good day.

OK gang, that was the travel update.  Now let’s get on with more images and descriptions from my Master Class two weeks ago – here we go…

Budapest Master Class Update: A Day At The Opera – Part 2 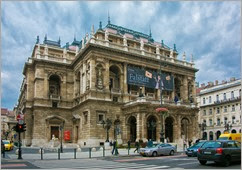 I mentioned a few days ago that the highlight of my Master Class with my good friend Clay Blackmore was shooting at the famed Hungarian State Opera House.  Check out  A Day At The Opera – Part 1 right here.  I had so many favorite images from that day’s shoot, I decided to spread them out over two posts.  Good news – today I finally get to show you the rest of my FAVS.  I hope you enjoy them.

After shooting on the main staircase of the Opera House from about every conceivable angle, I couldn’t resist trying a few more locations.  We had three instructors working at this location – that would be Clay, Jared Platt – our Lightroom instructor who was also on board for the week, and myself. With a little exploration of the surrounds here are a few more images from the day’s session.

Photo 1: I wondered out onto the balcony to see what was happening – photographically speaking.  The street surrounds were cluttered with buildings, power lines, signs, cars, trucks, pedestrians etc.  It was mid-day direct sun-light, not the ideal lighting but often what we face on a wedding day. I did spot an area that I thought would make for a nice portrait of our Daniel Craig look-a-like male model. I’m thinking…. if I can really constrict the background and just use the windows of the building across the street as my background, those windows would create the repeating element I’m often seeking to enhance my portraits. It became a tight crop but I think it worked well for this image. 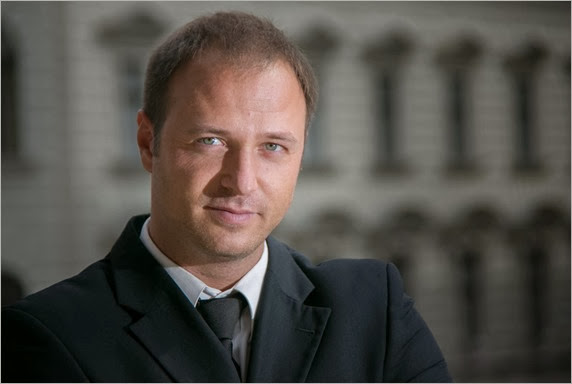 Photo2:  This image was made from the balcony of the Opera House as I looked down at the street below.  While photographing the portrait above, I looked over to the street below and loved the lines I saw in my potential composition. Look at the gentle S-curve line running through the scene just to the right of the bride.  The row of traffic barriers across the top of the image served to frame out the top part of the composition. The street lamp offered a nice visual balance to the rest of the scene.

All I had to do was light my subject.  That was accomplished by having my assistant, Roland in this case, bring the light in from camera right.  I got the direction of light I wanted without having to settle for the less dramatic/flat natural light.  I love how the image turned out. 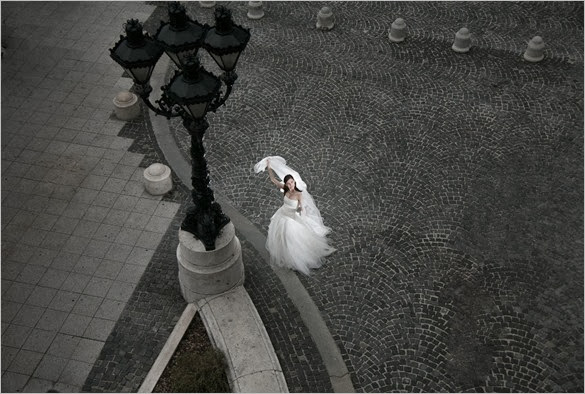 DAZNOTE:  Roland was pretty close to the subject to get the intensity of light on the subject that I wanted.  In fact, he was in the image.  But, like I’ve said many, many times, when you need to photograph your assistant to capture the lighting needed to enhance your image, be sure they are in a “Photoshop-able” area of the scene so you can simply remove them in post ;~)

Photo 3: On our way back into the Opera House, LaDawn suggested that I make an image at the main entrance and try to pick up the beautiful ceiling detail.  I thought it was a great idea and we set up the shot.

The problem was that the ambient light was so bright, we were going to lose the ceiling detail in the exposure.  I decided to not only backlight the bride, but light the ceiling as well with a third Canon 600 EX-RT speed-lite directed toward the ceiling. I got the exact result I wanted. 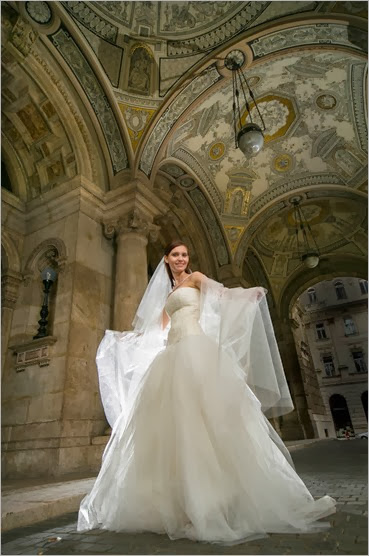 Camera specs: Canon 5D Mark III fitted with my Sigma 12 – 24 mm lens at 22mm, 1/200 second at F5.6, ISO 200.  Lighting camera right with Canon 600 EX-RT speed-lite through my Zumbrella. Additional backlighting supplied by a second Canon speed-light and a third speed-light on the ground, behind the bride pointed towards the domed ceiling above the bride.

Photos 4, 5, and 6: Next we headed back into the Opera House.  Everyone else was hanging out on the second floor of the building which gave me complete reign on the first floor and what spectacular sights awaited us! Just look at the architecture and detail of the mosaic tile work throughout the floors, walls, and ceiling – unbelievable!!!

Lighting was basically the same for each of these three images – one on the bride, one for backlighting, and one on the ceiling behind and above the bride.  The only real change was in camera position or lens zoom setting to modify the composition and/or crop of the images. Pretty cool, don’t you think? 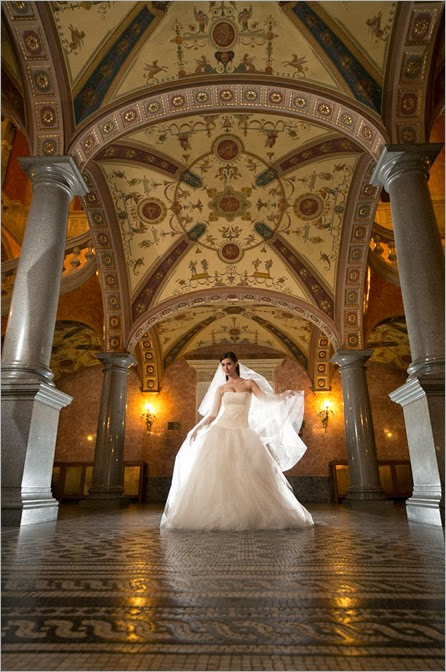 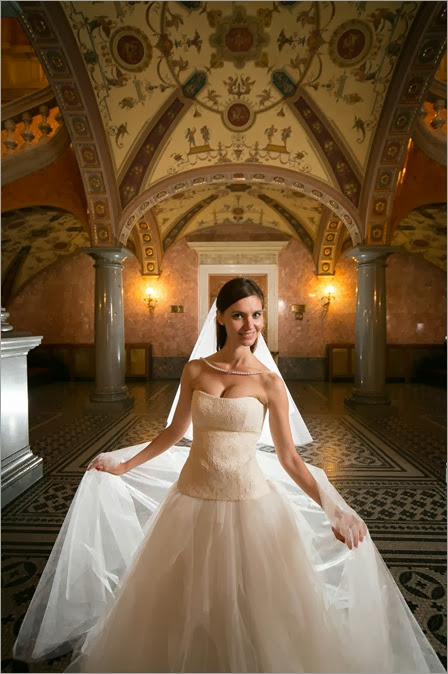 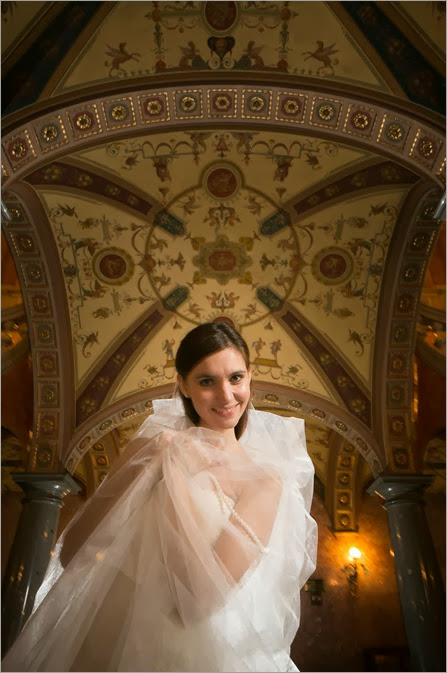 Camera specs: Canon 5D Mark III fitted with my Sigma 12–24 mm lens at 24mm, 20mm, and 22mm respectably, 1/20 second at F5.6, ISO 1600.  Lighting camera left in the first image, then moved my assistant to camera right with Canon 600 EX-RT speed-lite through my Zumbrella for the second and third images. Additional backlighting supplied by a second Canon speed-light positioned on the floor about 12 feet behind the bride. A third speed-light behind the bride illuminating the ceiling behind and above her.

Photos 7 and 8: As I continued to explore the surrounds I discovered a great vantage point with me laying on the ground shooting up to the ceilings of the other floor levels above me.  WOW! What a site.  It was tricky to get the bride in a somewhat comfortable position – I was in “pain” by the way laying on my back in a half “sit-up” position to frame the bride up the way I wanted.  Who says wedding photograph can’t improve your abs :~)

Again, exposure and lighting was pretty much the same as with the previous three images with the addition of that third light illuminating the ceiling above and behind the bride. 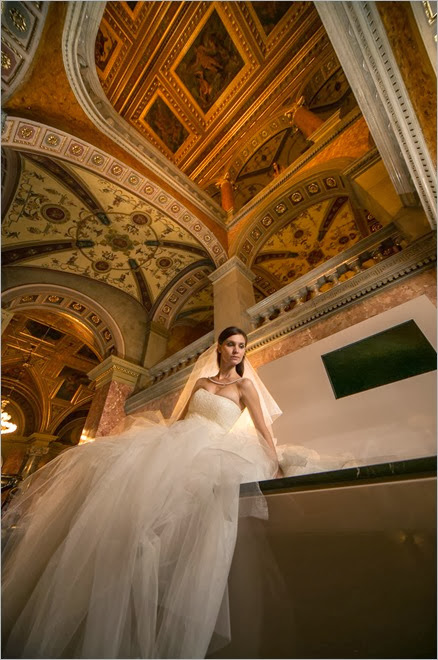 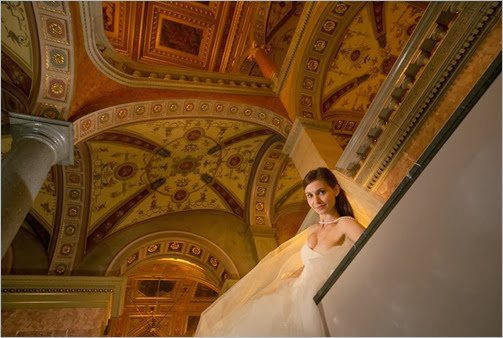 Camera specs: Canon 5D Mark III fitted with my Sigma 12–24 mm lens at 22mm, and 13mm respectably, 1/20 and 1/30 second respectably at F5.6, ISO 1600.  Lighting camera right for the first image then camera left for the second image using a  Canon 600 EX-RT speed-lite through my Zumbrella. Additional backlighting supplied by a second Canon speed-light positioned on the floor behind the bride. And a third behind the bride illuminating the ceiling behind and above her.

There you have it, a great set of images from a super fun filled day of shooting at the Bulgarian State Opera House.  Boy, I can’t wait to go back – maybe next year :~)

Hey gang, that’s going to wrap it for today.  I’ve got one more day of shooting to share with you so I hope you’ll check back.  It’s another fine set of images I think you’ll enjoy.

Have a great one and I’ll see you soon,