The ABCs For Photographing Birds Of Prey–For Real 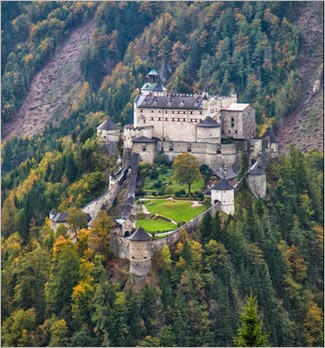 What an adventure we had these last two days.  Yesterday was one of those days that you think you’re going on another castle tour – don't get me wrong – castle tours are very cool but yesterday’s tour also included a demonstration of Falconry. Falconry is the hunting of wild quarry in its natural state and habitat by means of a trained bird of prey.  It was one of the coolest things LaDawn and I have ever seen.

We headed off to Hohenwerfen Castle which towers above the Salzach Valley in Austria.  We had passed this castle many times on the way back and forth 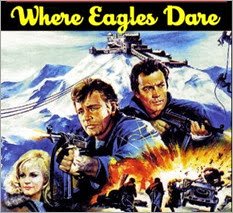 to Salzburg. It looked really majestic sitting high above the expressway almost standing guard on the valley, which BTW, was it’s purpose 600 years ago ;~)

BTW, if this looks a little familiar - Hohenwerfen Castle was the location for the movie, “Where Eagles Dare” with Richard Burton and Clint Eastwood filmed back in 1968.  Notice the castle in the background of the poster. DAZNOTE: After touring the castle – only one problem with that adventure – I got locked in the torture chamber.  Yes, it’s true.  I side stepped the tour group to get some photographs of the dudgeon and when I returned the group had left the room and the guide locked the door behind him.

Uhmmm… What to do.  After about 20 minutes I was able to jiggle with the locks on the doors a bit and managed to get myself free. I missed the rest of the tour and when I finally caught up with the group our tour guide was surprised to see me and exclaimed that LaDawn had noticed me missing and he had come looking for me, along with a few other employees, and wondered how I got myself out. I thought I would keep my castle secrets to myself and just smiled back ;~)

Where was I?  Oh yes, after touring the castle we headed down to the courtyard area you see in the photo above to see the Falconry exhibition. The handlers spent about an half hour demonstrating how the knights and nobles of old used falcons and other birds of prey for hunting and for show. 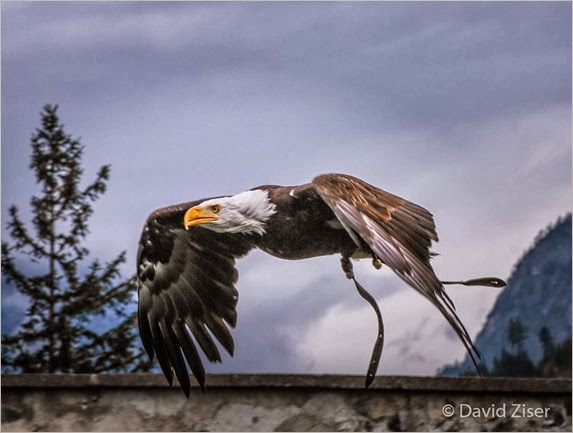 What was so cool was how they had trained the falcons, eagles to swoop, dive, climb, and fly around the audience.  I literally had birds coming straight towards me at times and then quickly change course back up into the sky.

How To Photograph A Falcon Demonstration and Not Blow Your Shots

It was one of the most visually exciting things I had ever seen and as such wanted to get some great shots of the demonstration. Being a regular tourist and pro photographer, I was traveling with my Canon 5D Mark III slung over my shoulder which was fitted with my trusty 24-105 IS lens. The camera was set to “Auto ISO”, and “P” for Professional ;~)  I was ready for anything, right?  WRONG, anything but a Falconry demonstration. 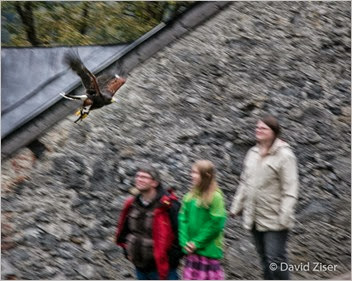 I was shooting away without realizing that every thing I thought I was getting was completely out of focus and full of motion blur. The camera thought I was shooting regular shots on a fairly cloudy day and was setting the camera exposure at about F8.0 at 1/320 second – lousy settings for a fast moving bird of prey show.

Thankfully I had the foresight to realize the error of my ways early on and quickly reset the camera settings to 3,200 ISO.  Why so high?  It was a cloudy day and I felt I needed a very high shutter speed to stop the action of the birds in flight.  ISO 3,200 let me shoot at 1/1250 second at about F8.0. 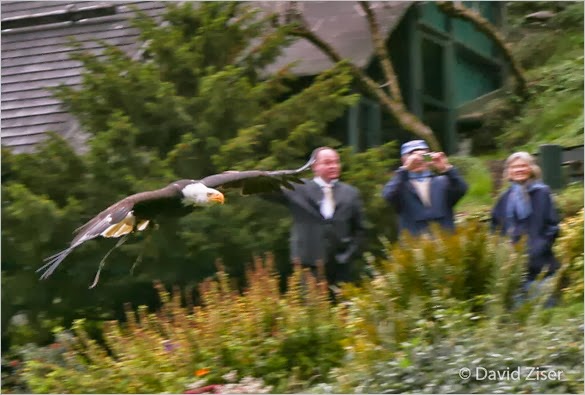 Next I set the Auto Focus setting to “AI Focus” so the lens would focus following the birds in flight.  Next, I ramped up the frame rate to the highest setting for the camera – 6 frames per second.  I thought I was almost ready but then I made one more adjustment.  I switched from RAW mode to JPEG mode.  Why? Because I didn’t want the camera’s buffer to fill too soon because of the speed in which I was shooting.  JPEG let’s you shoot many more images before filling the buffer and the way the birds were swooping and flying around I didn’t want to miss anything. 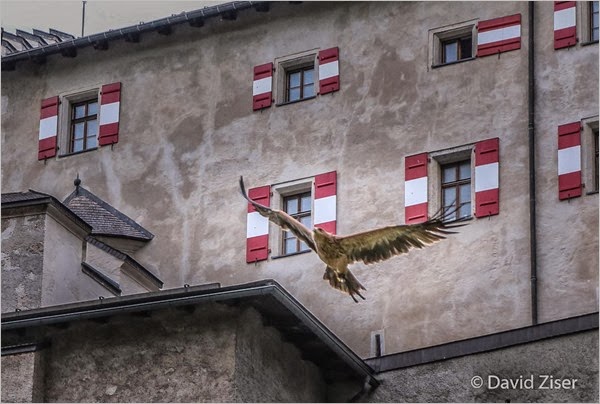 After the new camera adjustments were made I shoot away.  After about 500 images in the next 20 minutes I landed a few good images.  Good thing I turned my thinking to “Pro” thing on the fly – no pun intended ;~)  I was pretty excited with my results.  Below is a small album of some of my favorite images.  Enjoy!

Hey gang, that’s it for me today.  We still have several more sites to see and things to do before we head out on Saturday.  Lots more heading your way here at DigitalProTalk so please stay tuned.