We just wrapped our visit to Prague in the Czech Republic, Praha, to the locals, and what a wonderful four day visit it was to the city of hundreds of spires!  Can you believe it - just 24 years ago the city and the country were under the control of the Soviet Union.  So much has changed in such a short time. The once gray dingy and dark city is now full of color and bustling with energy & tourists! 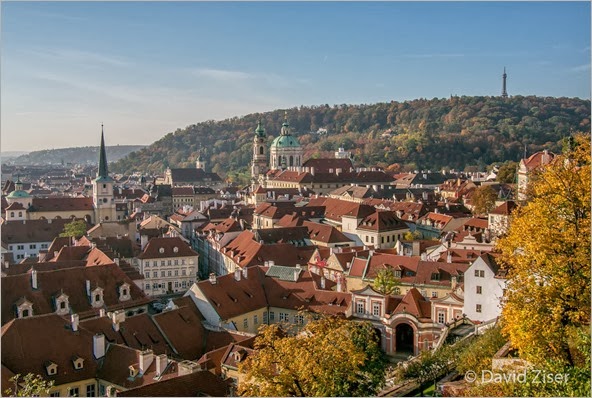 We stayed at the Hilton Hotel - Old Town, a five star hotel and about the best Hilton property we have EVER visited. The amenities and the staff’s dedication to service were unexcelled by nearly any hotel I've stayed in for the last 30 years. High fives to the staff!  We would highly recommend this location if your future travels take you to Prague.

Anyway, this hotel was definitely in the middle of the action - a short step out our door and we were in the center of historic Old Town Prague.  Prague has a rich and long history with its key players being St. King Wenceslas - yep, that Good King Wenceslas from the Christmas song - and Holy Roman Emperor George IV who put Prague on the Middle Ages map of Europe, free-thinking writer Franz Kafka and even Sigmund Freud.  You can pick up on the city's history from the links I've embedded in this post. 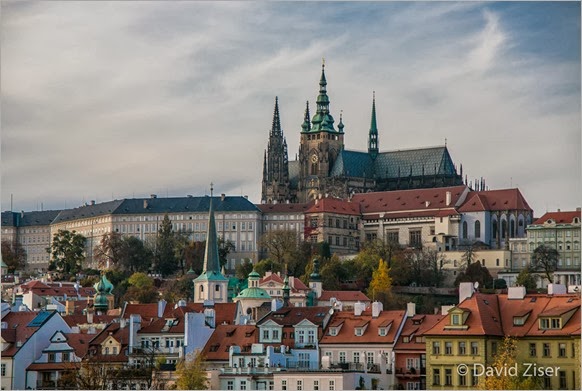 Prague's big claim to it’s tourist fame is the fact that it is one of the best preserved European cities in all of Europe because it completely missed most of the damage and especially the bombings in World War II.  Yep, all the buildings from the last thousand to several hundred years are still standing. To me, it looked like the little Paris of Central Europe.

That is not to say that tourism has not taken its toll on this city.  The city feels maybe a bit too western with all the McDonalds, KFC, Subway, Starbucks, et. everywhere. 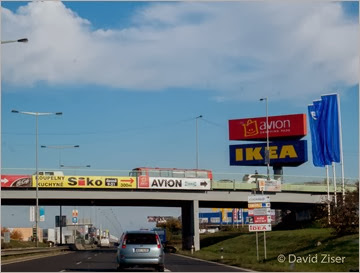 Even the highway overpasses were covered with signage for everything from McDonald’s to Coca-Cola. Sadly there was a fair amount of graffiti to be found on many of the historic surrounds.  Too bad for such a magnificent city.

In spite of  semi-pervasive graffiti it still did not mar our travel experience in the least.  Prague is a beautiful river city and in the four days we were there we crisscrossed through the streets and soaked up as much of the city as possible.

The city is alive with street performers, artists, food vendors in nearly all the major  squares.  For a city under Russian’s thumb for so many years, the end of communist rule wasn’t until 1989, it is now bursting with unbridled energy of entrepreneurism. My first quick observation was the number of weddings taking place all around the town.  Brides were abundant everywhere. I think I counted at least six to ten during our visit. 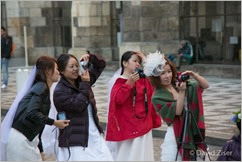 Another thing the city is known for is it’s great architecture.  From Romanesque, Gothic, Baroque, Renaissance, Neo-classicism,  Cubism and even Art-deco. With a 1,000 year old history, the city covers many centuries of changing times much of it richly preserved and you can see it everywhere.

On our first complete day in the city, we made the hour hike up to the Prague Castle grounds and to St. Vitus' Cathedral for morning Mass service. It turned out to be a really BIG deal Sunday service with multiple celebrants, incense, and a pipe organ that could have blown-the-castle-down with it’s spectacular sounds. The experience will definitely be one of our fondest memories.  The cathedral itself is spectacular in every sense of the word - history, architecture, size, color, design, and music. 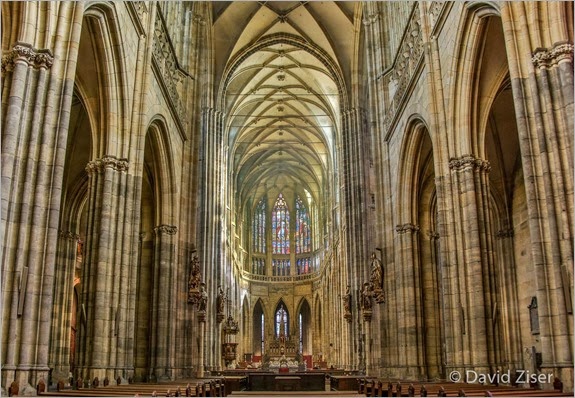 Yes, I said music. I guessed correctly that the 10:00 a.m service would be the larger of the two Sunday services.  What made this service so grand was the music from the thunderous and beautiful pipe organ.  It seemed that every 10 minutes or so the organist was blasting out another beautiful piece of organ music - I happen to be a HUGE fan of that musical genre and I was thrilled. 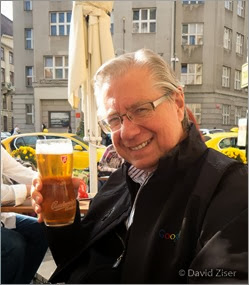 At the end of the service, the organist climaxed his performance with a 15 minute rendition of the most powerful, beautiful, fabulous sounds I have ever heard in my life!  Heck, maybe we were at heaven’s gate ;~)  What a way to begin the new day!

After the morning service we explored the castle grounds via walking and rented headsets for a few hours before heading back down to the city. After getting back down to river level - yep, Prague is another of the European river cities and enjoyed an adult beverage - for me one of the world famous beers from the area - and just enjoyed watching all the river boating activity.  The weather - deliciously warm and sunny - the day was perfect!

DAZNOTE: That’s the original Budweiser beer I’m enjoying in the photo.  The rest of the story right here.

What Time Is It In Old Town! 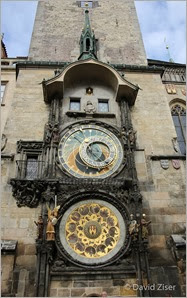 The next day we got an early start - we wanted to see the famous Astrological Clock ring on the hour.  This is like a must do tourist thing while in Prague.  We watched - I thought, "No big deal."  More on that later.

The goal for the day was to find a personal guide to show us the sights. We should have arranged this earlier but thought we could easily handle it at the hotel. The Rick Steve's podcast said we should be able to locate a personal guide for around $25/hr.  I'm thinking no problem till we checked with the hotel concierge and we're told the cost would be triple what we expected. 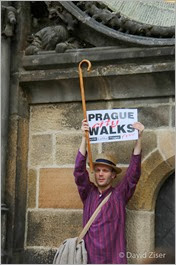 We decide to venture out on our own.  I noticed during the Astronomical Clock stop a young man waving a sign offering free walking tours!  Heck, sounded like a deal to me so I approached him to see what his offer was all about.  Basically, if we didn't like his tour, we didn't have to pay.  Otherwise a tip in the amount of 15 Euro per hour was his going rate.

We took Vite up on his offer and we're off on one of the best walking tours ever!  Vite's knowledge of the city and it's history was unparalleled in my opinion.  He covered architecture, history, and many of the historical locations in Old Town Prague.

We began the tour around 11:00 a.m with Vite giving us the full lowdown on the Astronomical Clock a true marvel of precision and engineering for a clock built in the 14th century.  Please hit the link here to get all the clock details – AMAZING!!!  We wrapped up shorty after 5:00 p.m. with a quick visit to the famous Charles Bridge running over the Vltava River. We were wiped out but oh so much more knowledgeable! 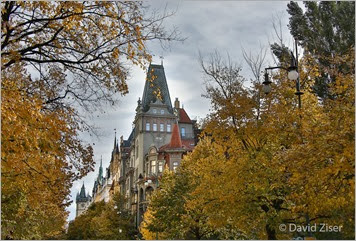 Someone had warned us that walking on cobble stones all day could be a little tiring.  It has something to do with how the heels and soles of your feet are constantly being realigned with each step on the uneven walkway.  After 15,000 steps, they were right:~). We wrapped the day with dinner and then headed back to the wonderful hospitality of our Hilton Hotel.

Up Close and Personal With The Holocaust 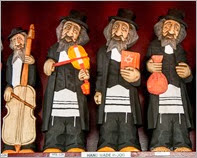 , The Lost Wife by Alyson Richman, The Invisible Bridge by Julie Orringer and The Storyteller by Jodi Picoult, during on travels about the horrors of the Holocaust and the devastation to the Jewish citizens especially in our visiting cities of Prague and Budapest. The Jewish community has existed in Prague for 1,000 years and at one time was the third largest community in all of Europe.

Individuals being robbed of their belongings, dignity, family members, livelihood….while being forcible sent into restricted communities and/or concentration or work camps. The next day we headed to the Jewish Quarter (yes, full of tourist stands) to look in on the history. Hundreds to thousands of families were forced into restricted areas meant for a few hundred people. Little to no food, no work, no schooling, living conditions at it’s worst. At the turn of the century in Prague the Jewish ghetto walls were destroyed and systematically around Europe synagogues and communities were burned. Several small synagogues were allowed to remain in Prague as the Nazi’s thought these would be turned into a macabre “Museum of an extinct race”.  The Old-New Synagogue built in the middle of the 13th century, is the oldest synagogue in Europe and is the oldest working synagogue outside of Israel.

Then World War II happens.  Nearly 183,000 Slovak Jews were killed.  Even today less than a thousand live in the city, but as we visited this area we learned that the population is beginning to grow, freedom to observe their traditions and openly participate in worship after the Russian occupation of 1989 has finally been restored. 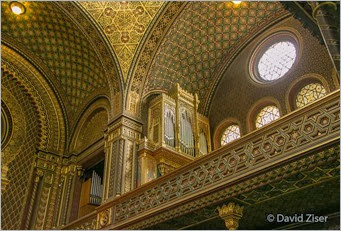 The most heart wrenching part of the tour for me was seeing the images and the pictures, poems and stories the children created while in Terezin, the German concentration camp just outside of Prague.  Only 242 of the over 8,000 children under 14 years old deported from Terezin survived. Next to each photograph was the child's birthday and the day they died.

Another area we visited was the Old Jewish Cemetery established in the early 15th century. Today it contains 12,000 tombstones but the number of persons buried is over 100,000. Jews were not allowed to be buried outside the ghetto, so the dead had to buried on top of one another, sometimes up to ten layers deep.

How did the world let this happen? How do we continue to turn our heads as these atrocities to humans continue around the world in Sudan and Syria? All of us know the horrible and tragic story of the Holocaust, but for most of us in America, it is a horrific experience that didn’t touch us personally.  Being in the middle of that history, seeing the tombstones, the photographs, reading the exhibits during our tour certainly made it more real for me. 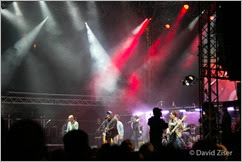 On the way back to our hotel, a big rock concert the promoters had been setting up all day in Old Town Square was in full mode with the locals and tourists filling the streets of Old Town rockin’ on!    We still don’t know why the concert was being held – none of the locals knew what was going on, so we just went-with-the-flow, hung out and enjoyed a few of the songs. 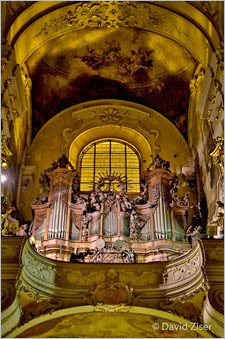 Speaking of concerts, on every street corner of Prague someone is selling tickets to a musical concert.  You can find tickets to Organ concerts, Chamber music, ballet – just about anything and just about everywhere!!  After reviewing our many options we opted for a Organ Concert in the beautiful Church of St. Giles.  The organist and trumpeter played the greatest hits for pipe organs and I was once again enthralled!

We headed back to the hotel after dinner completing another long day.  Today we need to pack up and make the five hour drive to Vienna, Austria, another wonderful gem in our tour of the Tierra of Central European cities.

I've put together an album of some of our favorite images from Prague below.  Please enjoy!

Hey gang, that's it for me today. Hope you enjoyed the post.  I'll be coming back at you with a quick peek at our next stop. Stay tuned.

See ya' then,  David