Photos From My “LIVE” Wedding Shoot 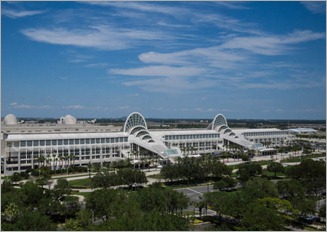 We landed safe and sound in sunny Orlando late Monday morning.  We’ve been going a million miles an hour since we arrived, but we’ve been having a great time.

I had my “LIVE” Wedding Shootout scheduled from noon till 6:00 p.m. on Tuesday.  Tuesday was looking like it was going to be a long day as I had a special meeting with Adobe in which they present all the latest, greatest new features of upcoming software releases. The instructors received instructional information on the new Lightroom 5 features – way cool. I’ll cover some of my favorites in an upcoming post.

I wasn’t able to stay for the whole meeting since I had to leave early to get ready for my noon class.  We had quite the crowd gathering in the meeting room – about 45 people attended the pre-con class. The students that gathered was indeed an international group. We had photographers attending from not just across many states in the US, but also from the Dominican Republic, Canada, France, and even Australia! It was quite an honor to be presenting to such a wonderfully exciting, international group of photographers.

Heading Out On The Shoot

Over the course of the next six hours we covered lots of material.  One of the things I like to do for my class is to provide an edited set of my images from the pre-con so I always ask the attendees to concentrate on capturing the overall views with their cameras time-synced to my camera. With my images and their reference photographs, the two sets of images together provide a wonderful learning resource.

Here are a few images from the class. All images were produced with my Canon EOS 5D Mark III Digital Camera and Canon Speedlite 600EX-RTs, natural light, and my Zumbrella.  Main lenses included my Tamron 28-300mm Lens, Canon 24-105mm, and my Sigma 12-24mm wide angle lens.

Image 1:  We found a beautiful natural light pouring in through a large window in the convention center begging for a photograph to be captured. I loved how the white wall behind her was well illuminated too – a simple yet perfect high key background. 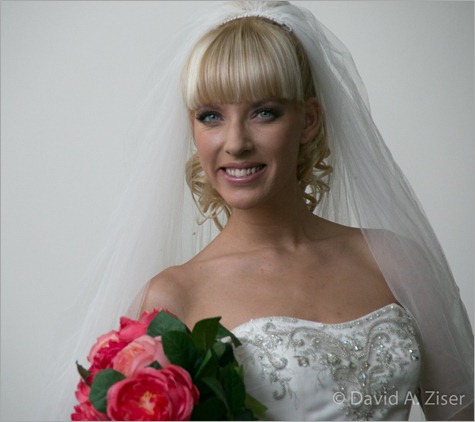 I used my Tamron 28-300mm Lens and zoomed in close to the bride.

Image 2:  I had planned to photograph the groom on the third floor but the sun over lit the area where I wanted to make his portrait. I quickly resurveyed the scene and found another area that I thought offered a dynamic background, full of angles and lines, behind the subject. 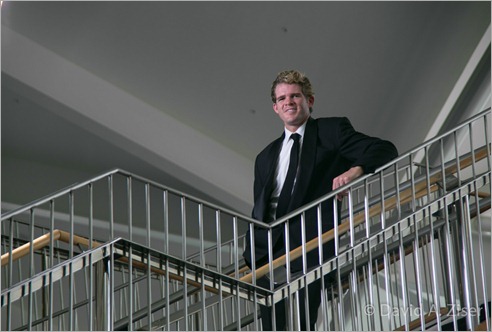 Image 3:  This next image is just a simple classic bridal portrait of the bride in the church sanctuary. I enhanced the photograph with a few new features in Lightroom 5.  I’ll tell you about them in a later post. 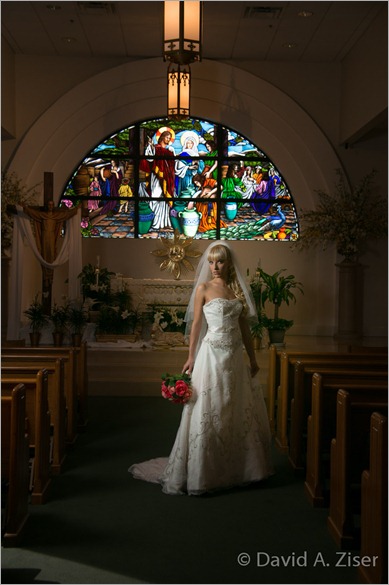 Image 4:  This photograph was made outside the church on a very bright, sunny day. I knew I wanted to use hi-speed flash sync to illuminate the bride and groom. I positioned the couple in the shadow of the  church. I then made my exposure for the clouds and sky above the church and then added the power of three 600 the XRT strobes to the bride and the groom to balance the exposure. 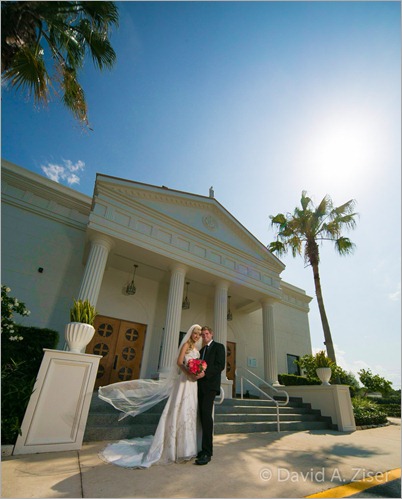 Sometimes the gear appears in the photograph as it originally did in this image but, by using the “content aware” tool in Photoshop the gear was easily removed.

Image 5:  This next image is a portrait of the groom in the Orlando Convention Center. The image was made about 5 hours later in the day and the bright sunlight was no longer a problem.  My lighting is coming  from camera right from 1 Canon  600EX-RT Speedlite fired through my Zumbrella. 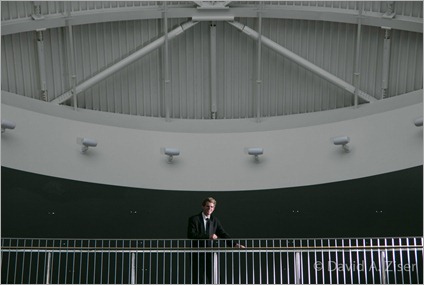 We had a great day on the road and then returned back to the classroom for my wrap-up. During this year’s session I covered our sales presentations and marketing strategies for the class. This was a new experience for me and for the attendees who have attended my classes in the past. The class seemed to thoroughly enjoy the additional information.  The class even ran over about 25 minutes, but nobody really seemed to mind ;~)  I’d like to THANK everybody and I hope all enjoyed the experience.

Hey gang, that’s it for me today.  Time is tight around here but I’ll plan to do another show update from the cruise ship over the next few days.  Yep, LaDawn and I are heading across the Atlantic tomorrow morning.

See ya’ from the middle of the Atlantic, David