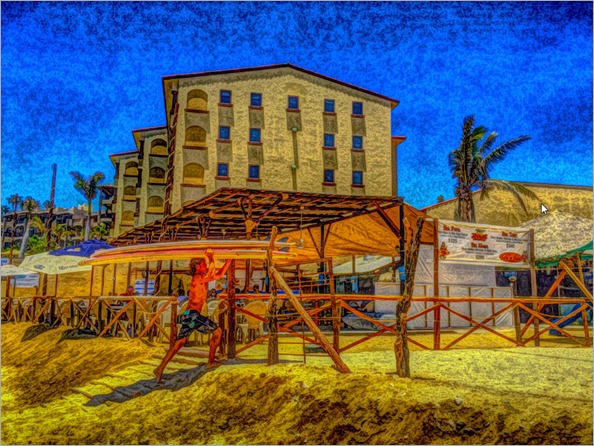 I made this image a few days after a long 90  minute walk down the beach.  My final destination was a little beach restaurant named Zipper’s.  It’s quite popular with the surfers that make their annual pilgrimage to San Jose del Cabo for the fine surfing ways.  In fact, this weekend is the annual Los Cabos Open of Surf competition [link] with takes place right at the world famous Zipper’s beach.

Just as I was making my way from the beach up to the restaurant, I had to pause briefly for this “surfer dude” to pass by.  The moment was perfect as he passed right in front of Zipper’s.  His long stride, the perfect horizontal position of the surf boards balanced on his head, and all the Cabo colors in the background made for a strong composition.

Yes, I did tweak the image substantially. And yes, the image was made on my iPhone 6+ phone – my favorite phone of all time ;~) The first image tweak was made in an App named Dynamic Light – it’s a kind of cool instant HRD app.  After dialing in the effect I wanted – basically a super saturated contrasty effect, I saved out the image and reopened the image in a second App called Painteresque. This second app results in some of the most unusual and painterly images I have ever seen.  I prefer the Painteresque2 setting.  It is just so much fun to play with.

A final tweak of colors and contrasts in Lightroom CC gave me the final result I was looking for.

I know some of you may be thinking that I’ve gone over to the “dark side” of camera phone photography - but not true. The technical excellence built into these little jewels is amazing. For me it’s all about the finished image – a final rendering of color, contrasts, composition, color harmony, imagination, and creativity that pleases the viewer.  I think this image does just that!