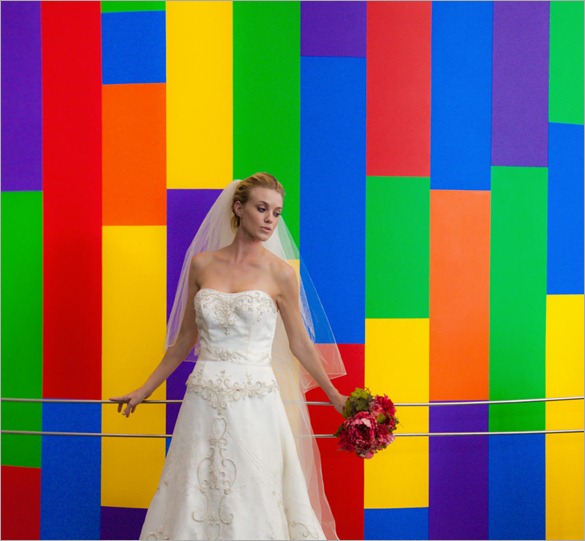 "Color My World”
©David A. Ziser

This is an image I made in Washington D.C. a few weeks ago.  We had just finished photographing at the church and had returned to the Washington D.C. Convention Center. Near the entrance was this large cylindrical very colorful display area.  I thought it would make a great background for a rather “colorful” bridal portrait.

I carefully positioned the bride in front of the structure and framed up the image.  The lighting was quite flat so I had LaDawn bring in my Z-Ray (Brinkmann flashlight) from camera right.  We had to be careful not to let the bride’s shadow fall on the colors in the background. The added illumination gave me the separation and dimension to the scene that I wanted.

I love the play of colors in this image.  I had to carefully position the bride’s face against only one of the colors – the green rectangle – so as to not distract the viewer with lines of the other color rectangles unintentionally intersecting her head.

It’s difficult to tell that this was a cylindrical surface – the metal rail gives it just slightly.  I also think the soft curve of the rail offers a slight contrast to the straight vertical lines of the color rectangles too – all in all a very intriguing wedding portrait.