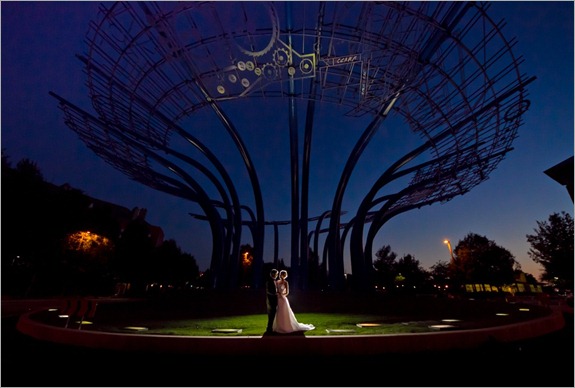 In honor of being at Texas School I thought I would revisit one of my favorite images from last year’s class. This image was called the “outstanding image of the week” at Texas School 2011.  I captured this image on the last day of shooting.  I was scheduled to be one of the instructors at Thursday' Night’s Shootout.  Although we were to meet in a nearby park to begin the photographs, as the evening progressed I knew I wanted to capture a few shots around the “Blueprints” sculpture at Addison Circle just a block away from the park.

I positioned the bride and groom at the base of the imposing sculpture after selecting the best composition for my photograph. I didn’t want to see the many buildings around the site so I took a camera position that gave me as many trees as possible in the background behind the sculpture. I also liked how the sky’s brightness and “blueness” transitioned from dark to light across the top of the image.

The contrasting colors, gentle tones in the sky, dramatic lighting, and very unusual location made for an impacting wedding image.